Why Now Is The Time For Senegalese Women In Tech

How Did it All Start?

When Binta Coudy De first voyaged out of Senegal, it was sometime in 2011. She was 22 years old and a computer engineer who was invited to take part in a tech competition that was put together by Microsoft in New York. In the worldwide sea of groups that competed at the event, Binta’s team was the only one entirely comprising females. Binta knew they were the only women tech team in Senegal, but it was surprising for her to realize that they were the only all-women group to appear in an international tech event. The Americans were more than happy to see black girls competing, so everybody wanted to talk and get to know them.

According to Binta, the scenario was a very interesting, yet somewhat disappointing – there were other women in the tech field, but no one knew of them. After this exciting trip to the United States, Binta and her colleagues decided to form what they called the Jiggen Tech Hub – the first ever tech hub in West Africa to be masterminded and run by women. This digital fortress is also called Jjiguène, which is a Wolof connotation of the word ‘woman.’ This volunteer-run hub has since 2012 trained hundreds of women and girls from Senegal, in tech and leadership prowess.

In line with Binta’s comments on the establishment of the hub and its functioning, people criticized the idea at first, raising questions as to why they had to create a women-only hub. But despite the aspersions and the apparent gender-shaped monkey on the backs of this team, they knew that Jjiguène was the only way they could reach out to women; teach them confidence and how to think of achieving their professional goals. This story goes in many ways to not only inspire women but teach the essence of digitalization in every nook and cranny of the world. Senegal is one country that has grown to become one of Africa’s important tech clusters, owing to many contributions in similitude to that of Binta Coudy De. One 2013 study conducted by the McKinsey Global Institute indicated that the internet-based businesses had a major part to play in the 3.3 percent GDP of Senegal – the highest any African nation has ever recorded. Experts say that this growth has been birthed by government-led initiatives, political stability and private investments.

Conforming to the sidelines of the Jiggen Tech Hub, several other women-led tech initiatives were gestated and birthed in this French-speaking civilization in recent years, becoming key players in her technological revolution. Coding camps designed for girls, startup weekends for women in the telecommunications sector and series of training to skill-equip young females to develop mobile apps, all of which make up only a few of the programs, made Senegal a tech cluster.

Females and Tech – the Mindset

Murielle Diaco, the CEO, and founder of Djouman, which is a platform devoted to the innovative and entrepreneurial growth in Africa, says that the tech industry in Senegal has been expanding in the last half-a-decade. She says the country stands as one of the most politically-stabled in West Africa – a state which has yielded the attraction of a numerousness of investments from companies as big as Google, Microsoft, and Orange – the French Communication Company. These investments have culminated in a vital upheaval in the number of incubators, accelerators and co-working spaces in this sub-Saharan country, which as at 2017 had the largest tech hub number, and currently hosting 10 of such organizations. Diaco had her own story to tell – an anecdote actually.

When Murielle Diaco was in school, there were many girls of her age who said they didn’t have any interest in mathematics, engineering or anything that had to do with coding, because they felt those were boys’ subjects. They had the mindset that tech was set out for the boys.

But that mindset is slowly going with the wind. 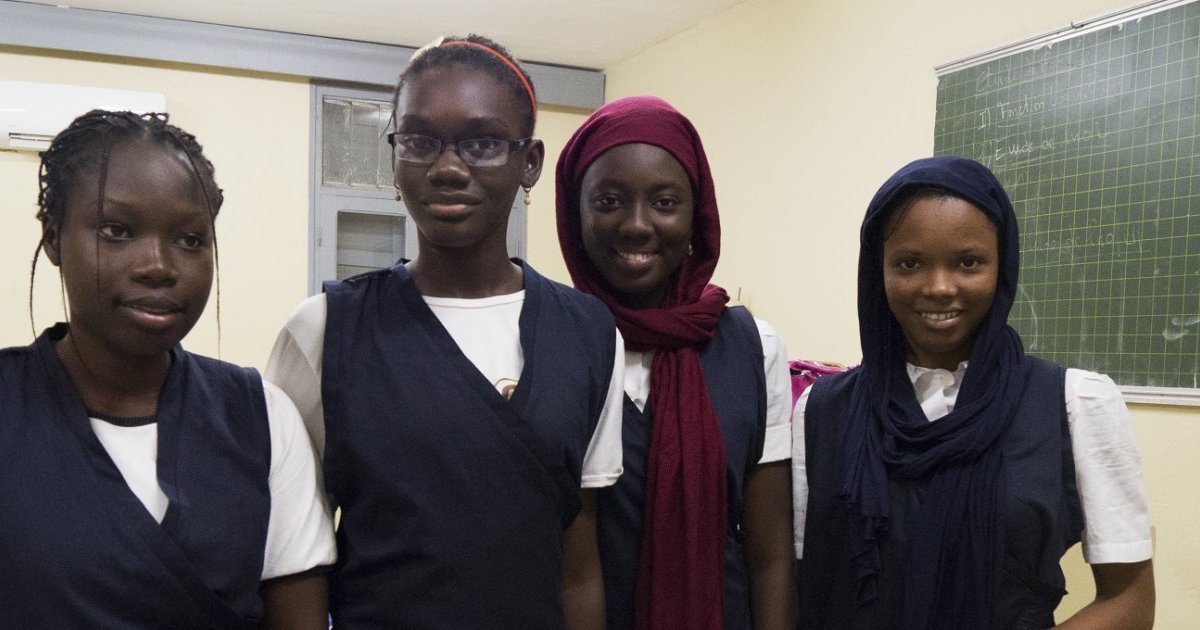 One morning not so far away from now, four high school students within the 16 to 18 age bracket convened inside Senegal’s most prestigious Mariama Bâ all-girls school’s science lab. It was break time, but this group of females wasn’t really concerned about playing in the compound or hanging out at the canteen. This girlfriends group made up of Kadiatou Diallo (18), Rokhaya Lisse(18) Anta Adama Niang(17) and Ndéye Antou Kebe (16) were flipping pages and denting on leaves while going through a physics assignment. This same group won the Made in Africa category at the Pan-African Robotic Competition which held in Dakar.

Receiving the prize on an international scene, these girls were asked what they intended to study at the university. Rather confidently, they each said: mechanical engineering, industrial engineering, and robotics. This not only wowed the crowd but set the ball rolling for females in Dakar and Senegal at large to kick ass. These girls were introduced to coding through trainings that were organized and held under the auspices of the Jiggen Tech Hub. Since then, they have been part of the coding pilot program in their school. They were asked about the gender imbalance in the tech industry at some point. One of them gave a warm smile and said: “All the more reason we need to get involved”.

For the past year, Senegal’s Ministry and Telecommunications has organized many Open Door Days with the aim of motivating young girls to work in ICT, either in the private sector or with a variety of government agencies. The schemes have been amalgamated with other including the UNESCO’s Youth Mobile Program, which aims to provide young girls with the fundamental technical skills to develop their mobile applications. Orange Senegal’s Female Digital Entrepreneurship initiative was also there to further the cause, aiming to narrow the digital chasm among female entrepreneurs in the country. According to Diaco, women in Africa generally have the entrepreneurial spirit; they always combine business with social impact. She says that’s tech is just another sector where females can prove that they are capable of building successful businesses.

On one quite balmy evening in Dakar, 7 young women were together in the library of a local university not far from the Monument of African Renaissance statue in the city. The meeting was illuminated by the glow of a projector screen, while the women tapped eagerly on the keys and trackpads of their laptops. What was going on? The speakers said it all – everything from the ways to market a business on Instagram to the basics of website design and the use of Whatsapp as a sales channel. One of the women was Rosa Evora, who was seated in front and taking notes rather furiously. At just 21, the business world was new territory for her, as she baked and sold cakes yet having a fervent grasp of digitalization. She learned baking from her mother, who worked as a cook at Dakar embassies. She was always by her mother, especially when she was baking cakes. Two years later, Evora threw together a cake masterpiece for her mom on mother’s day, which people couldn’t get enough of, as much as taking pictures of it and posting them on social media. After that event, she started getting requests to make cakes for people, and gradually, she started having regular clients. Now, Evora makes ten cakes in 7 days.

Evora and her mother

Rosa Evora looked to grow her cake business, but she was unsure of how to take the next step. So, she applied to ELLES’ Coaching – a weekly program for training female entrepreneurs. And, despite the fact that it was just her second week, made good progress and got inspired by the initiative. “When I come across other females who began with virtually nothing, now running their ventures, I think, well, I can do same too.” ELLES’ has been coaching young women in the tech industry, from code to design, online marketing and lots more. A duo of coaches from this platform, Lawson, and Gerbier have met with competition from male counterparts, but they have put their tech mastery into practice and used it to emerge at the top.

Gerbier says, “When they come across our CVs, they are of the thought that we don’t know what we are doing. So, they are always quite stunned when we do the work in half of the time it takes them”. Do you know where this statement was made? At the legendary Jiggen Tech Hub, on a very recent Saturday morning, when the place was buzzing with activity. In a classroom, 12 young women were learning about online marketing and another 12 were learning computer hardware basics next door.

One of the volunteer coaches at the hub that day was Aminata Balde, a 23-year-old who met with Binta four years ago while studying telecommunications in the university. This now-an-integral-part-of-the-program tech slinger said she really grew up with Jiggen Tech Hub, not being able to imagine that she’d one day be coaching people on e-marketing or computer use. For her, teaching other young women coding or webs design goes further than only entrepreneurship. In Senegal where gender imbalance is yet a long way from gone, the digital world can pave a path ahead. “Technology is growing exponentially”, Balde said, “But girls thin it is for the men only. We want to break that image.”

For young entrepreneurs like Evora, Senegal’s technological revolution could be the long-awaited answerer and provider as regards the expansion of startups. In the past few years, access to the internet has tremendously grown, jumping from a mere 5 percent of the population in 2005 to over 25 percent in 2017 and even more as of now. Businesses that are internet-based now contribute up to the 3.3 percent GDP, a digital transformation that has the capacity to boost the fortunes of female entrepreneurs across the country, if they can access it. Because despite being billed as “Africa’s Silicon Valley,” only 35% of IT jobs in Senegal are held by women.

According to Binta Coudy Dé, we “Don’t find many females in the tech scene, especially in decision making. But if we have more role models, then maybe bringing about a change will be possible”. From coding to public speaking to startup launching, Binta Coudy Dé is using the Jiggen Tech Hub to change the lives of women and equally dominating the tech scene of Senegal. “When you come, you will become more confident. Then, you will share what you know”, says Binta.