Reaching For The Stars: These South African Teens Are Set To Launch Africa’s First Private Satellite

Come March this year; South Africa will launch the very first private satellite in Africa into space. Now, while that may have been expected as the continent always had it coming, it is the fact that the said satellite is designed by a group of teenage schoolgirls that makes it quite an astonishing accomplishment.

Ayesha Salle, Brittany Bull, Bhanekazi Tandwa, Sesam Mngqengqiswa – those aren’t random names. They are part of a group of 14 South African high school girls who are looking to scribble their names on the scrolls of history by taking on something of an extraterrestrial expedition.

These are not your typical schoolgirls with perhaps those ‘Cheerleader’ and ‘Prom Queen’ ambitions that we tend to see in some of those Hollywood movies.

With their target being the launch of Africa’s first private satellite into space this year, they have their sights trained on a bullseye in outer space.

Aliens In Nairobi? Africa’s First 3D Video Game Was Made In Kenya And Look Who Put In The Work Solo

You Can Own Real Estate In The United States From As Low As USD 100 – How? Ask These Founders

The Funding Conundrum: Why Seeking External Funds Might Not Be a Good Idea For Startups

South Africans To Access National Parks For Free This September The girls, who are students of various high schools in Cape Town, South Africa, took on a project which involved designing and building payloads for a satellite that will hover in space, orbit the earth’s poles, scan the surface of Africa, and gather/transmit data that will be useful for agriculture and food production within the continent.

The data obtained is expected to come in handy in the determination of the continent’s current position in the area of food production, as well as the prediction of future problems that may arise. Going forward, this could inform the formulation of agricultural policies that can avert the looming food and environmental crisis.

“We can try to determine and predict the problems Africa will be facing in the future,” explains Bull, a student at Pelican Park High School. “Where our food is growing, where we can plant more trees and vegetation and also how we can monitor remote areas,” she says. “We have a lot of forest fires and floods, but we don’t always get out there in time.”

While in orbit, the satellite will supply information twice daily that could go a long way towards disaster prevention. The entire project was put together by South Africa’s Meta Economic Development Organization (MEDO), with some assistance from Morehead State University in the United States.

Africa’s history with space travel is dotted with glimpses of promise but hardly anything concrete. However, in recent times, a number of African countries are beginning to get in on the act with, again, South Africa’s ambitious Square Kilometre Array project being a good case in point.

The aim of the said project is to build the world’s biggest radio telescope which will help scientists unravel the mysteries of some of the farthest points in outer space. Add that to what these young girls look set to achieve and it does smell like progress.

The group of 14 girls is currently being trained on vital skills by satellite engineers from the Cape Peninsula University of Technology, as part of efforts geared towards encouraging participation from African females in the STEM fields.

If all goes according to plan and the launch turns out a success, MEDO will become the first private company in Africa to build a satellite and send it to orbit. And they would owe it to some 14 teenage schoolgirls. Amazing, right? 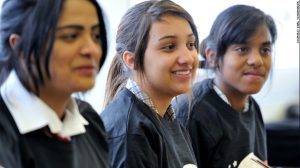 “We expect to receive a good signal, which will allow us to receive reliable data,” declares an enthusiastic Mngqengqiswa, of Philippi High School. “In South Africa, we have experienced some of the worst floods and droughts, and it has really affected the farmers very badly.”

It is no secret that South Africa has had more than its fair share of environmental struggles with drought and other adverse effects of climate change doing a number on the country’s food production capacity in recent times. More specifically, as contained in a UN Report, it is on record that an El Nino-induced drought led to a maize production deficit of 9.3 million tonnes in southern Africa as of April 2016.

That said, this undertaking by these schoolgirls might be the breath of air that will resuscitate the food production capacity and economy of not just southern Africa but also the rest of the continent. The satellite designed and built by the girls will have something of a panoramic view of the drought crisis that has hit parts of the continent and caused a shortfall in food production.

The girls got started on the project by learning to program and launch small ‘CricketSat’ satellites using high-altitude weather balloons. That helped them get to grips with the fundamentals and the knowledge gained was essential to the configuration of the satellite’s payloads.

Satellites of the kind designed by the teenagers are low-cost ways of exploring outer space and gathering information on the planet quickly. So far, tests have been run on the satellite for a number of assignments including the collection of thermal imaging data which have a bearing on early detection of flood or drought.

It appears a lot is hinged on the success of this project as going forward, it is expected to include girls from Namibia, Malawi, Kenya, Rwanda, and other parts of Africa.

The earlier-mentioned Mngqengqiswa is the child of a single parent. Her mother makes a living off doing domestic work. Like the other girls, the teenager will be doing herself and her society proud if she beats the odds and goes all the way to become a Space Engineer or Astronaut.

Beyond stargazing, these 14 South African high school girls are reaching for the stars, and they might touch it.