Most people would rather not waste time doing household chores. The trend is catching on across the African continent, along which line organizations are increasingly outsourcing their janitorial services.

These days, fewer people actually want to get around to their laundry and living space organization themselves, to the extent that they are willing to pay others (professionals) to do the work.

The mainstay is not different in Africa, where the millennial life is taking charge, and much concern is raised regarding the overbearing nature of a patriarchal society.

Nonetheless, there’s a certain doubt hovering around whether a chore-focused business model is viable in the continent. If anything, the recent significant funding for Egyptian cleaning services Jinni shows that there is indeed an opportunity in the sector.

Last week, the Cairo-based startup was said to have raised a six-figure investment from AUC Angels – a university-based angel network. Confirming the funding to WeeTracker, Alaa Shams, co-founder and Quality Assurance Manager of Jinni, said that USD raise is part of the startup’s seed round and would be used to accomplish a variety of things.

Jinni Services was co-founded in 2016 by Alaa Shams and her husband, Mostafa Ghannam, who is also the CEO of the company. The idea to start such a company was chanced upon when Mostafa once struggled with finding a professional cleaning service provider to look after a residential unit he and his wife newly moved into. Apparently, locating a cleaning service in this on-the-go age in some regions – especially Africa – isn’t easy pie.

“Many residential households struggle to find a competent cleaner for their house who’s also trustworthy, punctual, communicative, and reliable. The result ends up usually with the clients compromising one or more of these fronts to prioritize the trait that is important to them most,” Shams said in an electronic interview.

Recalling how the business got off the ground, Mostafa said: “Three years ago, we were thinking, what if we rub a lamp and a genie appears to help us order a professional cleaning service provider without sacrificing quality, trustworthiness, and punctuality? What if we wanted this to come through with just one click?”

Egyptian households rely extensively on external help when it comes to house cleaning and minimal chores. Navigating the informal sector to find and secure help can be a tricky ordeal. Insecurity, inconsistency, and overall dissatisfaction are often the key concerns is such a line of business. This is where the commercial and residential cleaning service Jinni decided to step in.

In Shams’ opinion, there is no magical formula for starting a cleaning business in Africa or the Middle East. “I believe it depends more on the market needs, understanding the technical know-how of the business, where to find the right personnel, to manage a good balance between the demand and the supply,” she said in an email to WeeTracker.

Nevertheless, the business model operable in Africa differs from that of the western world, and Jinni agrees with the position. Companies in the western world follow a different process mostly because people at different levels do not mind working as housekeepers, unlike in Africa, where most people deem the line of work as demeaning and meager. This is often the reason one cannot easily find a qualified and reliable sole housekeeper in most countries of the region.

“A friend of mine who lives in the United States used to pay her neighbor to clean her place to increase her income, and she was not ashamed of offering her services to the people of her network. This is not the case in the Middle East or Africa; it took us too long to convince the people to join our system and that there is nothing to be ashamed of”.

There are 42 million apartments across Egypt, from homes to business offices and mix-use to unoccupied. In spite of the type of use, such places need cleaning services on a regular basis. People often hit a rough patch finding a qualified, trustworthy, reliable, and cost-effective cleaner because they rely on recommendations from family and friends.

Another problem mainly comes from the lack of training to enable housekeepers to deliver excellent service. This sector is not formalized in Egypt where, in return, sometimes, the clients may take advantage of the personnel to do extra work or don’t pay them a reasonable amount of money. But Jinni is hitting this problematic nail right on the head and driving it far down where it should be.

Residential cleaners on the three-year-old platform can earn up to USD 500 a month – which is EGP 8 K. The business started with just 5 cleaners, but has grown its cleaner base to 150. The company claims that 60 of them went through training earlier in 2019 at a recently-launched Jinni academy.

It launched the academy to contribute to the development of the staff’s personal and technical skills. The business, through this medium, is as well ensuring that everyone who joins the system follows the same standards and procedures to deliver conveniently and consistently.

According to Jinni, it has served more than 3,000 residential customers and completed 12,000 orders. Some of its clients include Uber, Mondelez International, Egyptian Steel, and CO-55 – one of the largest co-working spaces in the North African country. Operating in Cairo, Giza, and the North Coast, the business has been able to grow its Gross Merchandise Value (GMV) from USD 81 K in 2017 to USD 186 K in 2018.

Jinni has also grown its thrice year-on-year to USD 59 K in 2019 for the period until October 2019. On how it makes it revenue, the company revealed that it has two sections on the platform. “We have residential services where we follow a pay per use model. Here, people pay for each visit. And for the commercial category, they follow a subscription model where they mainly sign annual contracts”.

Initially, the cleaning business received requests via Facebook, phone, and email. However, the startup recently released a mobile application that serves both ends of its marketplace. It only makes sense that Jinni will use the new money in the bank to improve the technology of the platform to render its services better, especially as it faces competition from Mermaid and Taskty – both of which are around the same age and also based in Cairo.

The Rest of Africa

Cleaning services in other parts of the continent, both on the large and small scale. In Nigeria, for instance, the sector is showing promise as it experiences unprecedented growth. The rise in demand for paid cleaners is attributable to the fact that working-class citizens are becoming increasingly busy to handle house chores.

Most city dwellers, due to the hustle-and-bustle of making ends meet, would rather have someone do these jobs for a pay. The elite also enjoys the freedom of not attending to their household work, and prefer to pay a fee to a pro.

In South Africa, the contract cleaning industry, which forms a part of the temporary employment services sub-sector, plays a significant role in job creation.

According to this report by Report Buyer, nearly 100,000 South Africans are employed by approximately 1,500 contract cleaning companies. The report shows that 620 companies, including 49 suppliers of goods and equipment, were members of the National Contract Cleaners Association (NCCA) as of July 2017.

From the Kenyan arm of the industry comes the story of Alex Nyaga, who founded Parapet Cleaning Services in 1997, when he was 21. Today, the business, a leading player in the sector, employs more than 3,500 people in Kenya and Uganda. The business has served the Jomo Kenyatta International Airport (JKIA) and the US Embassy, both in Nairobi.

BREAKING: These 5 Countries Are Now The Most Corrupt In Africa

Ban On Okada/Keke In Major Lagos Routes Not Affecting Transport-Hailing Startups… Yet! 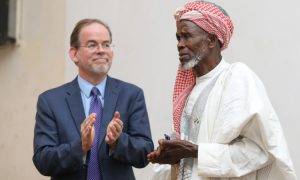 New Twist In The USD 9.6 Bn Tale – Representatives Of P&ID Have Been Found Guilty Of Fraud