FinTechs have gained widespread attention and have disrupted the financial sector across both developing and developed countries. Due to the low coverage of traditional financial services in Africa, the fintech sector has significantly grown over the past decade. AfriCo, a business intelligence platform providing data on private & public companies in Africa states that as of 2020, there are 674 active fintech companies in the African continent, about 80% of which are of domestic origin. Data from AfriCo further reveals that there 2020 saw 97 venture capital deals in the African fintech sector valued at USD 250 million, a sharp decline compared to USD 678 million raised by fintech startups in 2019.

Is this the bubble burst? Or just the Pandemic effect?

VC activity in the fintech space dropped by 6.7% when compared to 2019. The number of fintech companies that received more than USD 1 Mn also declined to 21 companies, a 25% decline compared to 2019. While the ongoing pandemic has raised demands for fintech services, the decline in investments compared to 2019 can be attributed to overall drop in investment activity as well as the increase in attractiveness of healthtech as a potential investment opportunity. Similar to fintech sectors in developed and other developing countries, the payments sector dominates the African FinTech arena. 24% of the total venture money raised by fintech companies went into the payments sector.

Will Investors look farther than these 5 African Countries?

The growth of the African fintech sector is highly concentrated in a few countries. The four main fintech hubs are Egypt, Kenya, Nigeria and South Africa.

These 4 African countries made up ~85% of the total fintech investments in Africa in 2019 and received ~82% of the total investment in 2020. As these hubs get crowded with more and more fintech solutions as well as more and more capitalists, newer markets have to be explored by both entrepreneurs & early stage investors to target the next billion.

In 2020, countries such as Ghana, Uganda and Zambia gained prominence when it comes to number of investments in the fintech space as well as total startups upcoming every quarter.

If You Want A Six-Figure Salary As A Nigerian, These Are The Companies You Should Be Heading To﻿

Can You Reach Anyone In Mauritania And Ethiopia? Still On The Internet Shutdown﻿

Inside Nigeria’s Bizarre Attempt To Tax WhatsApp Messages And Emails 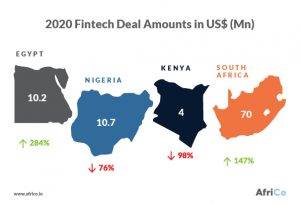 US based founders & investors are leading the fintech revolution in Africa

An emerging trend in the fintech & startup space in general is foreign-headquartered companies raising a major chunk of total investments raised. Typically, these firms have their headquarters outside the African continent but they operate through their offices in one or more African cities. Foreign players in the African fintech market are predominantly based out of the US.

In 2020, Chipper Cash raised USD 35 million led by various US based investors; which was among the highest raised by fintech players in 2020. Another example of a large ticket investment in fintech & foreign headquartered company was Flutterwave raising USD 35 million as part of Series B funding from a bunch of investors led by Greycroft and eVentures, both US based investors. 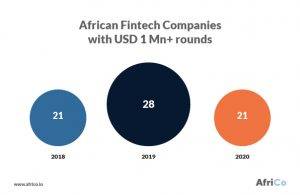 To a better year and larger impact

The 2020 venture capital investment data shows a decline in the percentage of investment in fintech when compared to the previous year. As much as the pandemic pushed the world into a depression, it increased the need for contactless payments thereby growing the market for electronic payments as well as other financial inclusion companies. Fintech startups in Africa are poised to grow in 2021, the pace of growth, however is yet to be determined. Will the US investors lead the pack again in building for the next billion? Will there be new investment hotspots? Will the governments create policies to push or pull technocrats. The next 3 months will subtly set the course.