In 2009, according to Champions 12.3, approximately one-third of all food produced in the world was lost or wasted. Sound like a business opportunity? JustNow has taken it upon itself to address what is a global epidemic, with a South African context. Food waste costs South African retailers USD 1.7 bn annually and JustNow has in the last two years reaped 5% of its total revenue from this market.

How does it work?

JustNow is a mobile platform that caters to the food waste concerns of both large and small food enterprises saving them money whilst increasing revenue and client engagement. This is achieved by reducing food wastage, employing a sales and marketing mobile application that interacts with consumers.

Rwanda To Join List Of Biking Cities: Shared Electric Motorcycles To Be Launched This Week

For The Past 1 Month, Bike-Hailing Firms In Lagos Have Been Paying A Dubious Daily Levy That “Hasn’t Been Agreed To”

1. A mobile consumer application – for promoting and claiming offers.
2. An integrated merchandiser application – for stock management.
3. The JustNow Management Dashboard – overview of the marketing channels and customer engagement, plus merchandiser app features for retailers.
4. An AI ARS (Automatic Replenishment System) that seamlessly integrates with the business’ accounting and register software for less work and better management. A monthly subscription is charged to the business and a percentage commission on any sales made through the online platform. CEO Alexandre Vellieux is happy to prove the concept of the platform, knowing that the revenues will follow. The startup has reportedly experienced 10% monthly growth in their subscription. “Right now revenues are limited to 4 paying shops out of 7, and with the level of deployment, in 2019, we’re planning to reach USD 340K of revenue by the end of next year in South Africa and USD 3 Mn in Europe. We are planning on breaking even in by next year – December 2019.”

Not every start-up runs the chance of making it to success and not every start-up has the privilege to call on an average of over 14-years’ experience in senior management positions – JustNow does. A chance meeting in January 2016 between the two co-founders is all it took for JustNow to be conceived. By March of the same year, Alexandre Vellieux and Brad Constantinescu had registered their company, having realized that the level of wastage must come at a massive cost for retailers due to the amount of surplus stock left on shelves.

Alexandre Vellieux has under his belt over 15 years of experience in senior management in the auditing, management of I.T branches and supply chains. A recent MBA graduate in Corporate Management and Strategies from Paris’s illustrious ESCP Europe campus, Vellieux is more than qualified in his role as the Chief Executive Officer. His partner and Co-Founder Brad Constsantinescu serves as the company’s Chief Technology Officer. Constantinescu has an equally impressive resume having served as the CEO of a Romanian ISP at the age of 22, currently serving as the president and CTO of Stone Soup Tech Solutions and a Masters in Artificial Intelligence from the University of Bucharest to boot.

The story so far…

Based in Gauteng, JustNow has been a self-funded venture, bootstrapping their way in the last two years. However, the startup says that this is set to change with discussions with potential investors ongoing and a funding round set to conclude in the coming weeks. The team believes to have shown a great deal of promise with virtually no competitors in what is an untapped USD 15 Bn market. 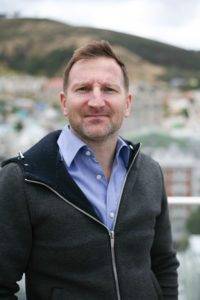 Veillieux and Co. have not been able to identify any local competitors in SA to date. However, they face one in Nigeria with a majority of the others in Europe such as France’s Optimiam & Zero Gachis, the UK’s Too Good to Go, and Denmark’s Yourlocal. Veillieux describes Optimiam as being “the closest to our concept, while Zero Gachis uses dedicated shelves inside the shops to present the products on promotions. Too Good to Go targets restaurants and cafes to provide meals at very low prices. Whereas, Yourlocal is a combination of both the French and English startups.”

Like many start-ups, JustNow’s “biggest hurdle in SA is the apathy from retailers and the trash bin.”

Nevertheless, Veillieux has cited that, “Consumers love our App. We get regular feedback asking when we’ll be acquiring new shops and when we’ll expand further into Cape Town. However, retailers are more difficult because it is a new app and concept. But they see the results we bring and they are more and more inclined to enter into discussions with us now.”

Veillieux also attested joining the Startupbootcamp program with bringing them within striking distance of players like Woolworths, Food Lovers and various connections to investors.

JustNow is currently operating in South Africa with 7 Engen Woolworths stores and Bryanston Organic Food Market in Gauteng. However, they aim to deploy Total Mugg & Bean stores as well as adding more Engen stores in the coming year. Revealed in a conversation with WeeTracker, Veillieux mentioned that, “we have interests from the other supermarkets, we should be soon sealing a partnership with some more familiar names locally. We’re about to launch in Romania with the second biggest food retailer in the world -Carrefour. We will pilot with Delhaize and Metro as well.”

2018 is promising to be a significant year in the two-year-old’s startup life and one can only wait with bated breath at what the outcome of their funding round yields.

“If we manage to influence our customers and make them change their behaviour about food waste, we already won. Our goal is really to change the way people shop, taking into account sustainable living. And in the meantime, we’re also here to lead retailers towards more revenue and less waste. This is a no-brainer and the world is our limit!”, Alexandre exclaims.