With Plans To Enter Gauteng And Western Cape, Sxuirrel Is All Set To Raise Its New Round

Sxuirrel, a peer-to-peer startup for storage space and parking has aggressive plans for expansion this year. Sxuirrel is an idea that was conceived in a hostel room in Stellenbosch University back in 2016 and today; it is gearing up to become a unique marketplace for South Africa.

Michael-John Dippenaar, Henri Bam, and Michael Louis created an iOS app in April of last year and set it out for local testing amongst their network. What inspired the creation of the app on their own part was an increasing demand for affordable and accessible storage space in their locale. So, this app was created to connect the rising demand with the supply. With the platform, the student community who are in need of on-demand storage solutions that are also pocket-friendly and flexible can get in touch with space owners directly. In fact, the startup has positioned it as the ‘Airbnb’ for storage space.

The young startup became part of LaunchLab incubator last year, where they fleshed out their idea for six months. With assistance from the incubator, Sxuirrel set its business fundamentals and found an investor who bought the vision.

By Sxuirrel’s reckoning, South Africa does not have a significant platform catering to storage needs of individuals. It also believes that the P2P storage industry is a vibrant one with multi-billion rand potential. There already exists marketplaces on platforms like Facebook, where people can access space, but what such platforms primarily lack is trust. The startup acknowledges the importance of this essential ingredient and has taken advantage of the opportunity by adding a sense of community into their product – since the idea behind the startup is quite similar to the long-held norm that the immediate community is where you traditionally fall back to for small favours. 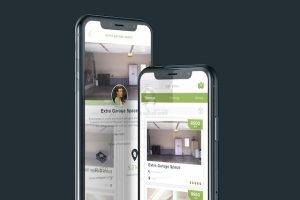 During its testing phase, the product had multiple iterations and was moved onto a website in November last year. The web platform that the startup has created works like an online marketplace where one can shop for storage and parking. Late last year, Sxuirrel raised USD 176 K seed funding from Intespace Holdings. They have since developed their product even further and added an Android app to their portfolio in April of this year.

The startup is in the process of raising a bridge round for further developments to make the core features of their product more stable by inputs from their customers and users. They are also looking to add features that will support the viewing of multiple pictures on the same listing. With the infusion of this round, Sxuirrel also intends to expand its presence in South Africa by onboarding many more space owners. Its primary focus will be to increase the supply of listings on its platform.

The team of six which juggles all the verticals of the company are confident that with these new additions to their product feature, they will see an upswing in the traffic drawn to their platform. For the founders, one of the primary challenges has been to create a habit amongst the users. Building a marketplace has been a difficult job, especially to balance the demand & supply aspects. And that’s just for starters as another challenge exists in the form of onboarding the customers. But the trio is upbeat and raring to go full throttle with expansion.

“Our next 6-month plan comes down to expanding our supply aggressively across the country, specifically Gauteng and Western Cape, and improving our product (the web and app platforms) based on user feedback, and key features we’ve identified as instrumental to the improvement of the UX”, said Michael.