As part of the three-day tour across Africa, British Premier Theresa May, after visiting South Africa on Tuesday, set foot on the soil of the most populous black nation. She arrived Nigeria yesterday and proceeded to the Presidential Villa in Abuja where she met with President Muhammadu Buhari, to discuss the security challenges faced by the country.

Theresa May and President Buhari also discussed the Nigerian economy and the variables of the 2019 presidential elections. In what was a first visit to the country, May catalyzed and witnessed the signing of a bilateral agreement on Defense and Security Partnership. The President and the Premier stood to watch as Nigerian National Security Adviser, Babagana Monguno, and the British Deputy National Security Adviser, Christian Turner, signed the memorandum of understanding (MoU). 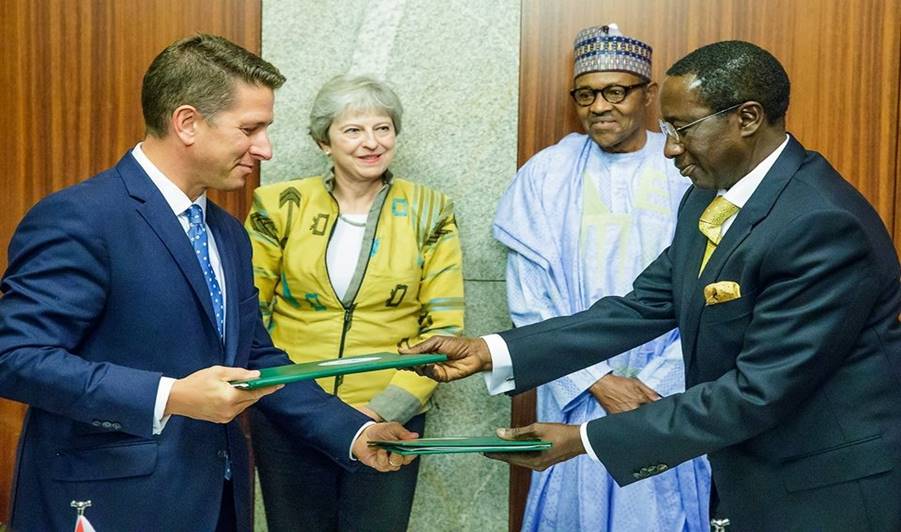 According to Geoffrey Onyeama, who is Nigeria’s Minister for Foreign Affairs, the Nigerian government and the United Kingdom signed the bilateral agreement in the areas of defense and security partnership, as well as a comprehensive agreement on economic development – yet covering a more extensive range of prospects.

Earlier, May had described Nigeria as home to highest number of poor people in the world, while mentioning in Cape Town on Tuesday that much of the country is thriving. According to her, many individuals are enjoying the fruits of a resurgent economy, yet 87 million Nigerians live under USD 1 and 90 cents in a day.

As soon as she was done at the State House in the Federal Capital Territory, Theresa May along with her entourage proceeded to the hippy city of Nigerian tech – Lagos, where she was received by Governor Akinwunmi Ambode, who welcomed her at Presidential Wing of the Muritala Mohammed International Airport in Ikeja.

After the grand reception at the airport, the British Premier went to the FMDQ Security Exchange Building in Victoria Island, Lagos, where she met with the Nigerian business community. Along with the members of her trade delegation, May met with an assembly of big names such as Aliko Dangote, Femi Otedola, and Tony Elumelu among others.

The 40-minute meeting was expected to provide an opportunity for forging more bilateral relations between Nigeria and the United Kingdom. She was said to have also spent some time with modern slavery victims during this brief stay in Nigeria’s commercial hub. This visit comes exactly eight weeks after French President Emmanuel Macron visited the African Shrine in Ikeja, Lagos.

Governor Ambode disclosed that the important part of May’s visit was to discuss how the British investors can improve investment in Lagos. “We realize that Lagos is the commercial capital of Nigeria, and a whole lot of British investments are domiciled in the state,” he said.
Ambode also revealed that May is ready to complement Lagos government’s efforts at judicial and security sector reforms by opening up an export credit facility develop finance into some of the things being done in Lagos. He also they the assembly discussed the boosting of technology, improvement of infrastructure and the betterment of the creative industry.

While speaking with the newsmen upon her departure, May said at the Muritala Mohammed Airport that she had an excellent time in Nigeria. She as well expressed her hopes to see increased trade and investment between Nigeria and the U.K. Shortly before departing the country at 8:10 PM; she said: “I was in Abuja and also in Lagos to see the thriving business community here. We want to see increased trade between Nigerian and the U.K, increased investment, bringing jobs here in Nigeria, and bringing jobs in the U.K.

To complete her three-day tour across her choicest African countries as British PM, May is set to visit Kenya in East Africa. Keep to tabs with us as we will bring you the highlights of what will be the wrap-up of this historic play.