The John Agyekum Kufuor (JAK) Foundation has launched the Kufuor Young Entrepreneurs Network (K-YEM), which is zeroing in on supporting young Ghanaian entrepreneurs in their growth and the development of business skills.

The initiative would be assisting, consolidating and building sustainable enterprises by means of capacity building activities such as coaching, mentoring, training, seminars and access to funds. K-YEM would also establish local and foreign partnerships to further build the capacity of its members.

Professor Baffour Aygemang-Duah, who is the CEO of the JAK Foundation, said that with a partnership of this caliber in support of the K-Yen initiative, members would be well-trained to embrace the crucial role of Small and Medium Enterprises (SMEs) play in the economy of Ghana.

Muhammad Awal, who is Ghana’s Minister for Business Development, lauded the former president for his efforts to bring about this initiative. According to him, the scheme must be supported by all Ghanaians to grow and develop young minds to venture into entrepreneurship. He as well encouraged the team to make the best out of the opportunity provided by the JAK Foundation.

“This initiative is a sustainable one which must be well-nurtured and given help to develop. I urge you young ones to be moved by desire and never create room to entertain doubts. I would use this platform to pledge the support of my ministry to this partnership and networking, in a bid to develop the nation”.

A Strange Ruckus And A Quelled Family Fracas At Gokada

Orange Is Pacing Its African Expansion With The Open RAN Technology

Drought To Blame For Rising Suicide Cases Among Farmers: New Initiative Unveiled Will Partly Solve This

From Grass To Grace & Back On The Grass – Once Featured On Forbes, Now In FBI Net For USD 12 Mn Fraud 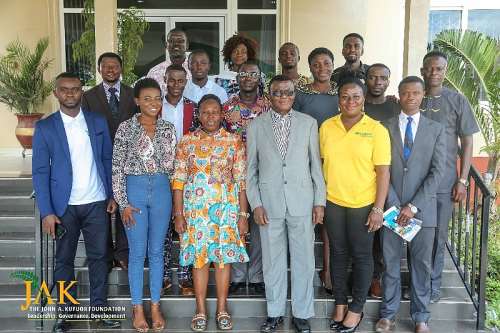 Former President of Ghana, John Agyekum Kufuor, who is the founder and chairman of the group, disclosed during this event that inauguration of the 15 pioneers of the K-YEN network is a flagship product from the foundation, which would be primed to become the future captains of the entrepreneurship industry in the Ghana region.

According to him, leadership is key in the development agenda of any nation, while expressing his anticipation as regards seeing a new breed of business leaders that would help to sustain the country’s economic developments. He said that leadership in all spheres of life requires the efforts of transformational leaders to develop the society successfully. “That is why as soon as I exited office as the president of Ghana, I founded the foundation to advance my vision of preparing young people for leadership.

Agyekum as well expressed his excitement concerning the formation of the K-YEM to transform future leaders of Ghana and hopefully Africa in general, convening young entrepreneurs for grooming. This, he says, affirms the necessity to strengthen the leadership of the private sector.

This development was first reported by Modern Ghana.