What You should know about the payment landscape in Kenya

With nearly 50% of Kenya’s GDP of  USD 75 Billion considered to be transacted over mobile phones in 2017, mobile commerce is thriving on a scale that has confounded many. With 25 million active mobile money accounts and mobile service points availed through a network of over 200,000 agents spread across the country, the ubiquity and easy access drive further usage of a solution that many Kenyans have now adopted as a normal means of payment. Mobile money has transformed every sphere of the modern payment system in Kenya creating a vibrancy that powers the local economic fabric making it possible to settle bills of any amount using funds stored in mobile wallets.

In 2017 alone, USD 363 million is reported to have been made over mobile money with retail payments accounting for nearly two-thirds of this value going into shopping, and utility bills payment from water, electricity, internet, and fuel as well as payment for government services. Increasingly also, travel, rent, school fees and luxury spendings such as betting, event tickets and TV channel subscriptions have continued to contribute to the high level of usage in addition to loan disbursements and repayments which can now be done from a mobile phone. This high level of usage with 25 million active mobile money accounts dwarfs the level of e-commerce whose association with the ICT industry accounted for contributing 8 % to Kenya’s GDP.  Frost in its forecast of digital services estimated consumer demand to reach USD 500 Mn in 2018. Jumia places e-commerce contribution to retail at a paltry 0.5%

16 million Plastic cards issued through 40 banks licensed by the Central Bank and an ATM network reported to be available in 2800 locations, and 40,100 point of sales machines, are used by a different consumer demography who are mostly formally employed and slightly more educated with base salaries of USD 250 per month. The formality and time it takes to sign up and receive the card is different than the speed and verification process for a mobile money wallet that happens at most within a few hours. Although Mobile money is mainly used for essential everyday necessities while e-commerce spends would be coming from non-essential, luxury, or from a consumer category with disposable income. This is depicted by known shopping habits where holders of debit and credit cards tend to visit convenience stores and supermarkets at least once a month for family shopping of groceries while those who don’t have plastic cards get their supplies in smaller quantities from corner shops or kiosks in their neighbourhood. Consumers who hold both mobile money wallets as well as plastic cards have more options of taking money out since ATM’s are also configured as alternative service points for making cash withdrawals especially at night or in places or situations where this might be more convenient for the customer.

According to research conducted in 2016 as part of the FinAccess household survey report released by the Central Bank,  age surprisingly plays a significant role in the type of financial service that is used in Kenya with younger people (below age 26) preferring to use mobile money while those from 26 years and above prefer to use the services of a bank as they grow older. It is interesting to note that older people prefer traditional banking services than mobile money wallets. 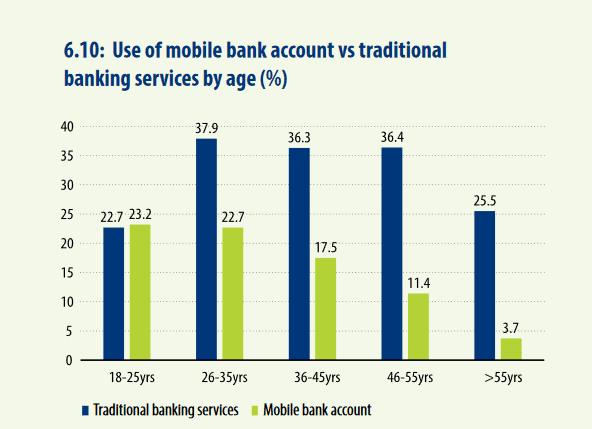 The right innovation and positioning of cards could still grow in Kenya since cash beats mobile when it comes to the ultimate settlement battle. The myriad modes of payments have opened a window of complexity when it comes to back office integration that on one hand prevent SME’s from adopting digital platforms while mixed interests and push for market dominance curtailed the implementation of cashless payment in the Kenyan private transport industry in sharp contrast to its success in Rwanda. Safaricom has continued to lead the way in innovation by introducing contact payment enabled by NFC technology which it is rolling out in convenience stores and supermarkets to offer a quick tap and pay experience which is simpler and more secure.

The dominance of mobile payments has left many Kenyan banks reluctantly playing catch up ten years later when they came together to launch PesaLink that was designed to offer a  higher maximum daily limit of  Usd 9.9 k  to attract mostly businesses and individuals who may need to move larger volumes of payment  presently limited by the mobile money permitted by telcos to a  of USD 1,400 per day made in two separate payments  which is a tough conditions set to prevent money laundering. Banks who by the nature of their core business are required to enforce a more stringent KYC (Know Your Customer) process for security and to also prevent the system from being misused for purposes that are either illegal or contravene Central Bank Policy guidelines.

Although Card payments dropped marginally to Sh1.38 trillion last year compared to Sh1.39 trillion in 2016,  Central Bank reported a rise in deals settled through cards by a million in the first quarter of 2018.  Jumia on the other hand through its Jumia mobile report reported only 2% of orders were settled by credit cards.  As cash is still the dominant method of payment in a largely informal market environment, banks have room to innovate and connect with a much younger demography.

When it comes to payments for goods ordered through e-commerce websites in Kenya, cash still remains the preferred mode of payment for many shoppers. This comes as a surprise despite the high number of active mobile wallets already reported. It is fair to assume that in most places in Kenya, the corner shops control a lion’s share of the volume with the rest of the trade going to supermarkets and convenience stores especially in urban centres.  Naivas supermarket which has over 40 retail stores in Kenya also reported a similar pattern as indicated by its CEO Willie Kimani – with cash still accounting for more than 60% of the company’s transactions, followed by card (17%) and M-Pesa (16%). Tuskys Supermarket is reported to handle USD 1 million from a similar number of retail outlets causing it to adopt smart cash deposit machines. The 2016 FinAccess survey, still reported that 94.6% of business owners still used cash as their main mode of payment especially if the consumers were paid by cash such as casual workers and agricultural workers. Only 43.3% of regular employees were paid in cash, with 47.2% receiving their wages electronically.

The complexity and fragmentation of Kenya’s digital payments system with more than 40 different players is also reported as a factor facilitating the dominance of cash. According to Francis Mugane who was speaking at a forum at Metta “In terms of back-end and reconciliation, the investment the merchant has to make is very high” with some point of sale terminals costing as high as USD 400. This deters many local vendors from making the necessary technology investments to facilitate such payments. “Because they are working with several different partners they don’t even benefit from the economies of scale because you are negotiating different prices with different partners.”