As though you were your own drill sergeant, it’s entirely up to you to get yourself off your butt and get to work. And that’s pretty much the story of Lydie Idel Makamdem Tchidjo; a Cameroonian student who is running a budding enterprise in three different countries.

Born into a modest background in which they were neither feeding on hand to mouth nor living the ‘good life,’ Lydie had always wanted to set up and run a business of her own – if not for anything but to have just about enough to take care of the needs of her immediate family.

As the first of six siblings who were being taken care of by a single parent since their mother lost the battle with cancer years before, there was always that unspoken expectation from the family and even society – a responsibility shoved right into her unprepared hands; one that had to do with her treading paths that will lead the family to ‘greener pastures.’

As the first child of a father who was a teacher in a local school, Lydie had displayed quite an impressive aptitude for academics from a very early stage. And her status as firstborn meant that she was also privy to certain privileges – one of which was an extensive career in academics.

Since her father was the only working parent, the family income was meagre. But because of her academic prowess, she was put through both elementary, high school, and even college on the backs of some tough calls.

Sometimes, paying her fees meant neglecting the needs of the family and pulling some of her other siblings out of school – no choice any parent should ever have to make, but such was the belief in her. The good thing was that she didn’t cave under the weight of the pressure in the end.

When it was time to further her education after obtaining a degree from the University of Douala back in 2011, her father wanted the best he could afford, and having gained admission into an institution in Germany, every blade of grass was covered to make sure that she went abroad for her studies.

Once in Germany, Lydie knew that it would be hard for her to survive on the stipends that she was getting. She was also concerned about her folks at home who might be starving just to keep her in school. Her family was doing the most to give her the best but were also depriving themselves of necessities like food in the process. And it didn’t feel right.

To put an end to that, Lydie decided to take up jobs as a way of augmenting her father’s efforts. Her initial intention was to juggle her studies with work so as to be able to raise enough money to cater for her academic bills. That way, her father would have to only focus on the needs of her siblings back home.

But things may have turned out better than she thought because not only were her savings taking care of her educational and personal expenses – there was enough money left over to send back home and support her family. And that’s precisely what happened.

She put in more work on her jobs in a bid to raise more funds, while making sure that her academic work did not suffer. She no longer needed her folks back home to send her money but one thing disturbed her.

Lydie was dismayed by the fact that she had to work so hard for the cash only to have a significant chunk of it gobbled up in transfer fees whenever she had to send money back home. The transfer costs were as high as 12 percent on every amount wired, and she felt her chest burn every time the money she was sending back home lost some serious weight after the removal of those fees.

She began to seek out ways through which she could curb the issue, and that was when an unlikely idea struck her. It occurred to her that her primary reason for sending money back home was to make sure no one went hungry. And being that she had been sending money all this while, there was no way of knowing if the money was being used for food.

Lydie knew that if she could find a way to send food home, it’ll take care of two problems – there will no longer be transfer fees to worry about and she would also be sure the family is getting food. Interestingly, it was those domestic concerns that led her to establish her own company.

In 2013, with some contribution from a fellow student, Leonnel Fonkwe, Lydie launched Familov; an online platform for the purchase of food, education, and healthcare products/services, amongst others. The business model is such that even though she’s still holed up in Germany, supplies are distributed to families in her homeland through a distribution chain in the country’s three major cities; Yaounde, Douala, and Bafoussam. Lukas Motsch (pictured alongside Lydie below) was to also join the team later on. 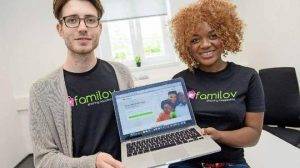 Her business enables people living in various parts of the world to conveniently pay for food supplies, education, and healthcare for their loved ones back home and rest assured that the money will be used for precisely the purpose it was intended, absent the exorbitant transfer fees.

As an illustration, Lydie could send food to her family in Cameroon from Germany by paying for it on the platform and through an organised supermarket chain back home; the food supplies would be sorted, packaged, and delivered to the beneficiary (in this case, her family) within 36 hours.

Her platform, Familov, ensures that significant fortunes are not lost in transfer fees. Also, it provides for the money to be put to use in the exact manner that it was intended since the benefactor is technically paying for a product or service and not merely sending money.

Currently, over a thousand users are signed up on the Familov platform. Beyond Cameroon, Familov has also reached countries like Gabon and Kenya where it also appears to be doing quite well. For her efforts, she took home the Social Innovation Prize at Google Startup Weekend in 2015.