Sometime in 2012, a twenty-year-old engineering student embarked on a casual trip to a community in rural Cameroon. The idea was to hook up with an old -time friend, however briefly, since both men hadn’t seen each other in a while.

What began as a casual visit set the ball rolling for what has now become a remarkable story – one that thousands of mothers in Cameroon and perhaps beyond will undoubtedly be thankful for.

In a world that is inhabited by over 7 billion individuals with different identities and motives, we ought to be grateful for those rare more moments when the stars align and happenstance brings people together to do good.

Okay, enough poetic talk. Alain Nteff was that engineering student who went all the way to a strange village to see his friend. Because the said friend, Conrad Tankou, was newly-trained medical personnel who was doing his practice in a hospital in that village, the duo had to make the hospital wards their hangout spot for most of the visit.

The visitor was supposed to be catching up on things with his old-time buddy but in those surroundings, it was always going to be a big ask. His friend, Conrad, had to attend to so many patients and answer a number of emergencies. This left Alain with more time on his hands than he would have liked. And in trying to keep busy, he stumbled upon a disturbing revelation. At first, it seemed like one-offs and unfortunate situations but Alain soon began to see a pattern – and a worrying one at that. He had only been around for a couple of days but had heard of too many due moms, new moms, expectant moms, newborns, and even unborn babies who had died from conditions that he knew could have been forestalled with proper antenatal and postnatal care.

Maybe he hadn’t been around long enough to jump into conclusions but if the evidence of the few days he had spent there was anything to go by, then the maternal and infant mortality rate in that community was through the roof. In a single week, he had witnessed as many as 17 infant deaths, and he was deeply troubled by the situation – too many poor women paying dearly for avoidable consequences.

Alain initially had a fireside discussion with his friend about the matter and he was pleased to discover that his fears and grievances were shared. Soon, both men got down to rubbing minds together on ways through which they could leverage their skills to telling effect in an effort to significantly curb the problem.

“I’m passionate about using technology to solve problems in my community, and I just saw it as an opportunity to apply my engineering to solve one of the world’s biggest and oldest problems,” says Alain.

Through a combination of engineering expertise and medical insight, both men agreed on a solution that has now come to be known as GiftedMom.

Their solution is a mobile health platform that uses low-cost technology to help mothers and pregnant women access medical advice in remote, rural communities where maternal care is often neglected.

After a series of iterations and tweaks, the platform was launched in 2013. Alain designed GiftedMom as an SMS platform through which registered mothers (both expectant and new) can get professional advice on their health and that of their infants.

Alain’s answer was the creation of an SMS service that expectant and new mothers could tether themselves to and receive advice on their health, and regular pointers and reminders as to why regular checkups are important.

“We realized that there was a need to create a low-cost channel to educate women on when they should go for antenatal care and when they should take their babies for vaccination,” says Alain.

Registration on the platform is quick and easy as it only requires one to send “MOM” as an SMS to the shortcode: 8006. A call follows from the service provider instantly wherein the mom gets further help to sign up on the platform. There is also the convenient option of simply sending a particular health question as an SMS to the same short code and getting a reply from qualified health personnel. 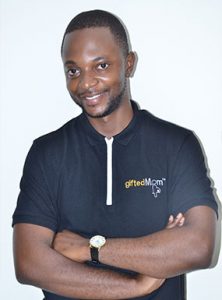 When GiftedMom first became functional, it was hard to get the women concerned to sign up. Many had doubts about the idea of getting help via a mobile phone. Initially, only eight women got on board with the platform but as its reputation grew, word began to spread and GiftedMom currently boasts up to 6,000 subscribers throughout Cameroon, and parts of Mali and Nigeria.

“The SMS we sent to the first pregnant woman was special — she said that when she read it she felt so much joy, and she was telling me ‘I feel now that somebody’s got my back,'” Alain enthused.

Signing up on the Gifted Mom platform requires a one-off subscription fee of much less than a dollar, and this is a bargain considering all subsequent messages which include alerts for when vaccinations for newborns are due are all doled out for free.

Alain and his team are also known to be toying with the idea of developing voice technology in four widely-spoken traditional languages which will cater for the needs of Cameroonian women who are unable to read and/or write.

GiftedMom shares close ties with USAID’s Mobile Alliance for Maternal Action. The project is focused on leveraging mobile technology for the improvement of maternal health in the developing world. Alain’s friend and partner, Conrad Tankou, leads a team of medical doctors tasked with providing answers to the queries. Alain Nteff found himself on another side of the planet some four years back after he landed an invitation to the World Economic Forum in Davos. He also took home some laurels having emerged one of the Global Shapers for 2015.

In September 2014, Alain took home USD 25 K having emerged the grand prize winner of the Anzisha Prize – a pan-African award which recognizes young African innovators and entrepreneurs who are solving some of the problems of their immediate communities.

Now 27, the social entrepreneur is still determined to reach many more women with the innovation and see to the creation of an Africa that is well-informed about its medical resources and free of maternal and infant death.