Don’t we all just love a good ‘rags-to-riches’ story? The idea of clawing one’s way out of the mud in the streets and into a jacuzzi in some beautiful penthouse in the chic part of town is one that resonates with pretty much everyone.

Spoiler Alert: This is not one of those. Sure, ‘zero-to-hero’ stories make good reads, they elicit emotion, encourage reaction, and motivate action. But then, there are those success stories that didn’t exactly start from the gutters but are just as good a lesson in persistence, hard work, courage, perseverance, tenacity, commitment, and determination, as any you can get.

And perhaps no one embodies that select group as much as the wealthiest woman in Nigeria and second richest woman in Africa. Folorunsho Alakaija was born into a traditional Nigerian family – one who decides the fate of females even before they have had the chance to form their first words. As is expected from every ‘responsible’ daughter in a typical Nigerian community, she submitted to the will of her folks and did their bidding.

Well, that shouldn’t be so bad as we would expect most parents to want the very best for their child. The problem, however, was that Folorunsho was always more, and their best was just not good enough. While it may have pleased all and sundry, doing their bidding turned her into a shadow of herself and minimised her potential.

And she knew she was more. So, for once, she opted to do her, and that was the first step in what has so far been an extraordinary journey. By carving her path, instead of just toeing the line that had been marked out by her parents, she has amassed fame and fortune that would’ve been unimaginable at certain points in her life.

Folorunsho’s story sets off from Lagos, Nigeria, where was she was born into a traditional, polygamous family in 1951. Her father, Chief Ogbara, was the traditional ruler of Ikorodu and he may have embraced tradition a little too much. Folorunsho’s father was husband to eight wives and father to 52 children.

Yes, it was a large family, but given his status in the community, no one batted an eyelid. And if it counts for anything, the ‘father of many nations’ took care of his family – he had the means, after all. When Folorunsho was seven, she travelled to Northern Wales for elementary school. And the next time she arrived the shores of her homeland, she had grown into a teenager.

Her high school education was completed in Nigeria, and when it was time for college, her father vetoed the choice of institution and course. By then, she had already grown into a young woman with her dreams and aspirations. But with her father breathing down her neck, she kept her plans under wraps.

Soon, she was jetting off to the U.K. to study a secretarial course as her father wanted.

It’s not that it was a bad choice from the old man, it’s just that she had other ideas.

When she returned to Nigeria in 1974, it didn’t take long before she secured her first job. She assumed a secretarial role at Sijuade Enterprises, where she worked for a year and a half. By then, she had begun to grow a mind of her own, and her aspirations were starting to come to the fore.

The first time she defied her father’s will was when she quit the secretarial job he had imposed on her in favour of a position in the banking sector. She took a role as Head of Corporate Affairs at International Merchant Bank, and even though it incensed her father, there wasn’t much he could do about it. For once, Folorunsho was not living someone else’s dream. Once on the new job, she rose through the ranks swiftly and took on a position in the treasury department. To many people, it seemed like good going. But to her, there was something else she craved.

Making the switch into the banking sector was a good move for her because it liberated her from parental shackles, but now the excitement had worn thin. And as the industry was getting flooded, it was time for a change – and this time around, it would be entirely on her terms.

She called it quits with the bank job and found her way to England. She enrolled in a fashion school – something she always wanted  – and since she had a natural flair for it, it wasn’t long before she started stitching some sizzling couture herself.

Convinced she had gotten the hang of the craft, the Nigerian entrepreneur returned home in 1986 and set up her fashion brand; Supreme Stitches. And it became an instant hit. Her brand became famed for designing haute couture for the creme de la creme of society, and Folorunsho could now be spotted in high power circles and highbrow neighbourhoods.

One of her bosom friends was Maryam Babangida; wife of General Ibrahim Babangida, who was Nigeria’s military Head-of-State at the time.

And that connection granted her access to people and made her privy to information. Eventually, she rebranded her burgeoning fashion brand into Rose of Sharon House of Fashion and her reputation continued to eclipse new levels of high. From covers of magazines to podiums of award ceremonies and governing councils of organisations, she was on a roll.

But the big one was on its way still, and all that fame and acclaim was setting her up for it. It was the year 1993, and it happened that she was picking the brains of the then military Head-of-State about the mining industry. This was on behalf of a friend of hers who initially had an interest in the matter but eventually moved on to other things.

The said friend lost interest in the matter because the findings looked anything but promising. But despite how bleak the situation seemed, the ambitious Folorusho decided to take the dive herself and invest in the industry.

With Maryam’s assistance, she was able to acquire a mining license through Famfa Oil; the fortune-bringing company which she currently chairs in an executive capacity. And she had to do with some stroke of good fortune too. 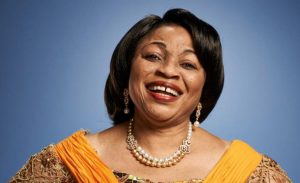 Having been allocated an oil bloc that no one else would touch because it seemed a dead end, several years were spent wondering if her huge investments had gone down the drain. But she got her slice of luck in 1996 when ‘the stone the builders rejected proved the cornerstone’ – and that’s a way of saying the oil bloc began to turn out the goods.

She got into business with Chevron, appointing the company as technical adviser for the exploration for a stake in the license. And later, the company brought Brazil’s Petrobas on board.

It’s been a joyride ever since. Folurunsho currently holds the reins at Famfa Oil; an oil and gas exploration company. The Nigerian entrepreneur still owns a 60 percent stake in Block OML 127 – part of the famous Agbami field; one of Nigeria’s largest deep-water oil discoveries.

Apart from her holdings in the oil and gas sector and the fashion segment, she also owns a string of prime properties in the real estate sector, both home and abroad. As at last year, her net worth stood at USD 1.7 Bn.

A renowned philanthropist, Folorunsho Alakija is known to champion several charitable courses scholarships, and grants for orphans, widows and economically-disadvantaged individuals. These days, the successful businesswoman is all about giving back to society.