This article is in continuation with our H1 2018 African Startup Funding Report. The six months have been pivotal for the continent as it takes on to a transformational climb. The upmark in funding, increased support from incubators and accelerators, the rise of consolidation activity is testimony to that. Through this article we intend to outline important developments from the first half of the year, that help us understand where the ecosystem is headed and how is the journey shaping up.

Lack of a regulatory and legal framework, bureaucratic bottlenecks, multiple taxes and higher cost of doing business has been a serious challenge that startups have been grappling with.

To solve this and put the country on the path of becoming a startup nation, the Tunisian parliament passed the Startup Act after two years of deliberation in early April this year. Apart from chalking out the definition of a startup with utmost clarity, the act came with a bundle of benefits for the startups. These range from exemptions from corporate taxes for up to 8 years and that from capital gains tax on investments, special custom procedures, salary for up to three founders during the first year of operations and more.

Zimbabwe Wants To Open Another Stock Exchange At Victoria Falls 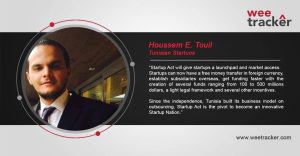 2)  Consolidation in E-commerce – too early a call ?

The e-commerce sector has seen consolidation on the level of bigger players in Nigeria as well as South Africa, two of Africa’s top tier tech geographies.

Two months after Nigeria’s largest online mall Konga was acquired by local tech firm Zinox in early February, it announced its merger with Yudala (affiliated with Zinox), another giant in the space.  The merger which took effect on May 1, brought together Konga’s cutting-edge online platform and Yudala’s expansive network of fully stocked offline stores.

Then mid of June saw the news of South Africa’s biggies in the space ─ Superbalist and Spree, owned by Media24 and Takalot respectively and umbrellaed by Naspers ─ announce merger.

E-commerce in the two countries has still at a nascent stage compared with developed nations, but has taken leaps and bounds recently. And it is interesting to see consolidation taking place in the market already.

3) Crypto in Zimbabwe – on a roller coaster ride

Zimbabwe happens to be one of Africa’s most active markets for crypto transactions.

The mid of May saw Reserve bank of Zimbabwe issuing a directive to all financial institutions in the county to cease trading or processing payments linked to cryptocurrencies.

The act put many crypto exchanges like Golix and Styx24.com, into disarray. Golix, as undeterred as it was, took the fight to the High Court asking the directive to be declared null and void. In an interesting turn of events, the court ruled in favour of Golix, after a no-show from the central bank to hold up their side of the story. The company went on to successfully launch its ICO.

Zimbabwe was also one of the four countries to have opened a Bitcoin ATM, apart from South Africa, Kenya and Djibouti. 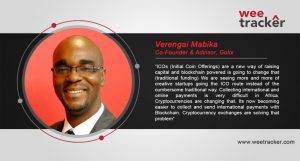 In what is the largest chunk of money committed to African starups, French president Emmanuel Macron announced a USD 76 million fund, which would be instrumental in “[filling] the gaps in the support with small sums ranging from 30,000 to 50,000 euros, which is what startups need.”

And its not just money that is flowing in from Europe, a renaissance effect too seems to have caught Africa.  A growing middle class in the continent, sustainable economic development, a digital transformation and political stability are amongst the driving forces that are  bringing about a Renaissance in the land.

Another noteworthy fund raise for African startups comes from Partech’s USD 70 million Africa Fund that launched in January this year. With the availability of such massive amounts of funds, the African ecosystem sure has the financial fuel needed.

Knife Capital, an active investor in Africa’s tech startups had invested in restaurant-tech company orderTalk. The company, got acquired by UberEats in May this giving a massive exit to Knife from its portfolio frontrunner.

As Keet Van Zyl of Knife Capital puts it, “orderTalk was the final investee company to exit from the ZAR150 million HBD Venture Capital Fund that Knife Capital managed. We have proved that locally developed technologies can have a global impact and that one can attain superior venture capital investment returns from South Africa.”

There would be no bigger feat for Venture capitalists to reap the returns of their investments, especially from nascent markets like that of Africa and clearly only points to the potential of the market.