A few years ago, two young minds met in the Presbyterian Boys Senior High School (PRESEC) in Ghana, where they were classmates and buddies sometime after. Amidst books and classroom lectures, the duo soon found that they had their minds set on a set of similar things. In what was the beginning of a memorable run for both youngsters, Kofi Genfi and Nii Osae Osae Dade began a foray down the path of technology and business. Kofi studied the sciences, but always was drawn by seemingly spelled ties to business. Nii, on the other hand, had a knack for gizmos and pretty much everything that was made from tech. Finding interest in the dreams of each other, Kofi and Nii became partners at a very early stage, but soon went their separate ways to study at the university. Nii attended the University of Ghana to study Computer Science, while Kofi read Business Administration in Ashesi University – a switch he said was inspired by his interest in business.

During senior high school, the pair while collaborating with David – a classmate of theirs, launched an operating system that would make phones more useful in Ghana, which eventually turned out to be unsuccessful. I guess every entrepreneur has his or her failure stories. Buttressing the long emphasized habit of not giving up, they came up with another idea, which has now turned into a full-fledged business that makes it possible and easy to send cash to people across all networks.

Kofi and Nii are the co-founders of Mazzuma, a mobile payments system that allows developers to send and receive money from all across the world. Starting from what is described as a narrowing of concentration, Kofi and Nii, alongside David built something Ghanaians seemed to be eagerly have been waiting for – the payment system that will introduce interoperability among telecommunication companies – Creative Young Smart Technologies (CYST). Out of CYST, Mazzuma was born as the first product, which has now become a flagship project that offers unique services which the founders say their competitors do not. This platform allows users to transfer money from one network to another, with zero charges applied. Mazzuma is also tailored to make it possible for customers to purchase airtime and pay bills, using the application which can be installed and downloaded on both IOS and Android. In an interview with Weetracker, Kofi Genfi disclosed that the company has since inception processed payments worth USD 3 Mn. But, the company snags its cash from selling the software to other companies.

CYST is an AI-first software innovation company that is committed to challenging conventions, aiming to bring about viable solutions to everyday problems with the use of technology. CYST’s operations are value-centered and geared towards the redefinition of the African stereotype. The team behind this strongly holds on to the simple philosophy that it needs to be the best at what it does – building technology that is relevant to local markets while complying with international standards. In what was described by the founders as a relentless drive and passion, the platform has been able to enable people to empower change through technology. The brainchild of Kofi and Nii with efforts from the rest of the team, through CYST, is Mazzuma a platform that is tailored to assist in the achievement of financial inclusion that successive governments have all included in their development agenda. With a view of making Mazzuma become the preferred payment platform in future, the two Ghanaian gentlemen are working on projects to make the platform even more encompassing. 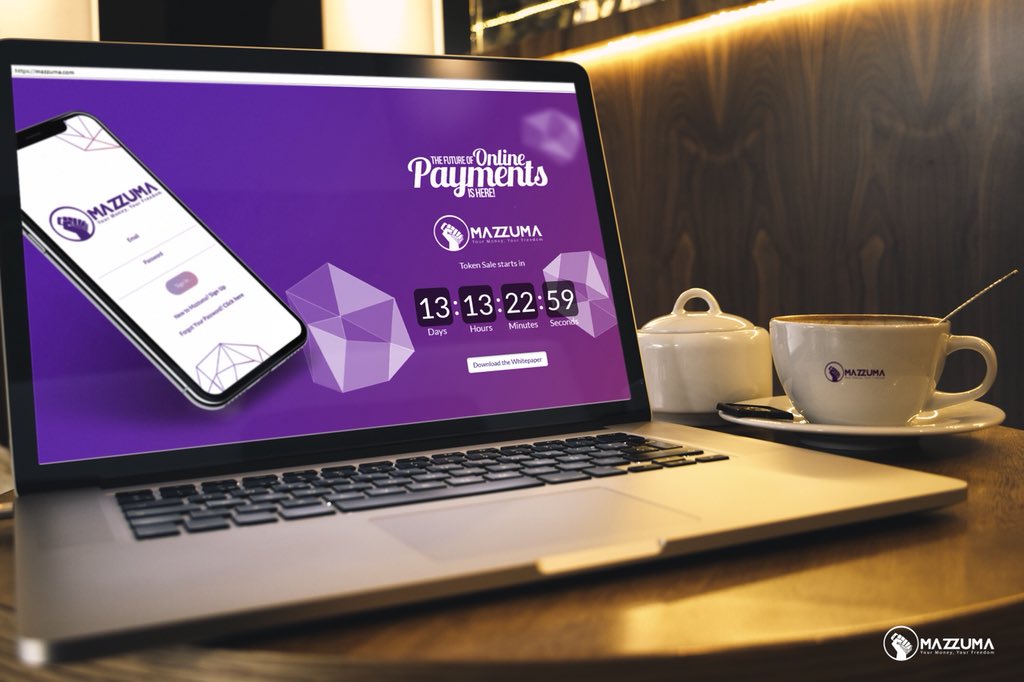 Nii, who is in his early 20s and the central IT brain behind the company, told Weetracker that the Mazzuma platform had been simplified to an easy three-step process through which one can send money to another person on a completely different network. Kofi, who is spoken-word and public enthusiast, also informed that the company has recently added cryptocurrency to the platform, as a result of international customer demands – a move he says had been well received by people from all over the world. Nii, an Artificial Intelligence researcher, and Software Engineer, is the one who integrates APIs to the Telcos, ensuring that each idea the Mazzuma team comes up with is very well implemented into the system. This crypto inclusion is called the Mazzuma Token, will be the crucial payment medium in the platform’s ecosystem. Offering services that are free of transaction fees and with light-speed transactions, Mazzuma is being used by Kofi and Nii to revolutionize the payment industry with instant cross-border payments.

A team of seven young Ghanaians runs Mazzuma. Kofi Genfi, the co-founder (of CYST) and Director of Strategy, who is in his 20s, and he seeks to deepen his affection for innovative business strategies. His contribution to his filed has garnered several recognitions, including Forbes 30 Under 30 Technology category. At as 2015-held International Speaking Competition which took place in London, Kofi was the only competitor from Ghana to make it through to the finals. Kofi, who is an aspiring free-runner, is also a member of the Thiel Fellowship Network which was founded by the technology billionaire Peter Thiel. Then there’s Nii Osae Dade, Co-founder and the Director of Software Engineer of the company CYST. Nii won the IBM/Airtel Mini Mobile Innovation Competition that was held to develop smart innovations using telecommunication. He is a devoted reader, violinist, chess player and a mental athlete who has interests in astrophysics and cosmology while being a member of the Astronomical Society of Ghana.

The team which has young energy in all spheres of its operations; has the 17-year-old prodigy in the crypto world, Elisha Owusu Akyaw, as the Cryptocurrency Marketing Advisor of Mazzuma. According to a story earlier published by Weetracker, Elisha is also the CEO of BlockXAfrica – a platform that helps companies that accept crypto as their form of payment in marketing. The reports say that this kid has helped startups raise USD 40 Mn in Initial Coin Offering (ICO).

Challenges
For these young entrepreneurs in Ghana, there are a lot of obstacles in the way of using Mazzuma to change the financials of the world. Chief amongst them is what appears to be a banning spree on cryptocurrencies by different countries. Upon been asked what these developments in places such as Zimbabwe means for Mazzuma, Kofi Genfi told Weetracker that: “These governments place bans of crypto as a result of fear, uncertainty and lack of real information. They do not know what digital coins hold in store, and as such come to hasty conclusions to remove it from their countries’ systems. According to him, these are more of trends because we have seen some back and forth movements in this regard. “Some of these countries ban crypto, then come back to say they are going to look into it and provide guidelines to facilitate the use process. Mazzuma is not afraid of these bans, because we believe at the end of the day, because crypto is being reconsidered for its employment creation, this tech is a digital asset/token that has come to stay”.

Speaking at length, Kofi said that “The claim ‘crypto is a scam’ shows lack of understanding, naivety, and unwillingness to learn. It is true that some people have been victims of this “scam,” but most of them fell prey to it because they didn’t follow the small rules to protect their wallet IDs and passwords. More often than not, just like leaving your checkbook signed and lying around, most of these mishaps that occur in the crypto space are the fault of users. If people stick with the basic rules of the technology, these accidents will cease to happen and crypto will continue to bring value to the world in ways we have never imagined. Crypto marks the first time that value is so easily transferable through a digital medium, and simple economic principles around it are applied. There are scam projects, yes, but at the same time some of them, such as social engineering tactics can be curbed by proper cryptocurrency education. So, crypto is not a scam, so we should just give it time to flourish”.

The CEO of the company also disclosed that another of the issues faced in the business is adoption. “Customer acquisition costs are quite high, especially for new products, so adoption is a bit of a problem. But we have out good marketing tactics that we put in place, and we execute them more as time goes on, and it will get better”. The CEO expressed hopes that the space is friendlier than it used to be in the past, especially in Ghana where the Ministry of Finance is trying to open up a more robust digital economy, partnering with fintech companies to make the idea a reality. “So there is so much good than bad, and we are excited about it.” Also, the entrepreneurial ecosystem in Ghana is not a quick and seamless as it is in the West, and this is a micro-economic factor that doesn’t allow processes to be much faster and easier in our operations. “But generally, things have never been better, and we are on the lookout for more improvement,” said Kofi.

Mazzuma and its flagship company have had various turning points, and the most prominent of them was the launch of the Mazzuma platform. The Vice President of Ghana attended the occasion, and he congratulated the team about the development. Another huge for the team came by when the company got good feedback from their advertising campaigns. People started signing in to Mazzuma, and it was really looking promising. “At some point, our transaction volumes began to skyrocket, and we became one of the most promising companies in the Ghana region,” Kofi remarked.

As for CYST, in particular, the company has gained prominence in the Ghanaian region, as it is now competing with the space’s best and being recognized by the government of Ghana. “We were recently invited by the Ministry of Finance to discuss the path forward with regards to how fintech companies can contribute to the development of Ghana’s digital economy. This was an exciting one for us, as it showed that our company meant a lot in the country”.

Another huge turning point for the company was when it was listed in the Forbes 30 Under 30 technology category. “The accolades were given to the company, and with it, we received a pat on the back as we have come a very long way from where we started, and it was a monumental achievement for us,” said Kofi.

The Way Forward
“It is quite ambitious to plan five years ahead for a tech company because things seem too fast.” But Mazzuma has an in-the-pipeline three-year target that dwells heavily on the blockchain. The team is looking to use this technology to develop more applications atop the Mazzuma ecosystem and improve and input more AI into the platform to make it stronger and robust. “We also want to take our products to other parts of the world and use them to testify about how much blockchain has come to enable us.”