Nigerian Economy Is Growing And You Will Start Feeling It Soon

World Bank recently concluded its International Monetary Fund Meeting in Indonesia, on sidelines of which, the Nigerian Minister of National Planning made a few remarks. Senator Udoma Udoma spoke extensively on some of the issues facing the Nigerian economy today. The nature of the Nigerian economy and its impact seems to be a rather overly controversial matter. While some believe the country is already zeroing in on the most bountiful opportunities, others are yet skeptical whether the efforts put in by different people will yield telltale effects.

As of 2017, the growth rate of Nigeria was 0.8 percent, which grew to 1.5 during the first half of 2018. While hopes are high in the clouds that the story would be 2.1 by the year’s end, a 3 percent increase is in expected from next year’s performance. Nigeria unarguably is rampant in the aspect of what goes on the Sub-Sahara Africa, owing to its economy being the largest there is in the region. As a result of this ranking, Udoma Udoma was invited to discuss about Nigeria with regards to various issues raised by the IMF report, which projected that the country would grow by 1.9 percent in 2018. Nigeria did go into recession in 2016, but that didn’t stop it from making solid progress all the way from a seemingly crawling 0.8 percent growth rate of last year.

Nigeria is projected to grow by 2.1 percent in the coming year, and that is telling enough that the country’s economy is making impressive progress, moving in all ways but the wrong directions. The Senator disclosed that IMF remarked that Sub-Saharan Africa as an entirety is expected to experience a 3.1 percent growth. While there are opinions that the region ought to do much more than that, the same cake slice is hoped for Nigeria – as it is hoped to be pivotal in the region and grow at a faster pace than envisaged. According to Udoma, Nigeria’s target by the end of the plan period is 7 percent. “We believe that if we can achieve 4 to 5 percent, Nigerians will begin to feel the impact of economic growth”, he said. 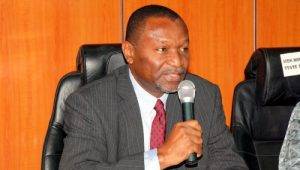 Reports have it that a substantial number of the Nigerian populace decry the current state of the country’s economy, enthusiastically opining that they cannot yet feel the impact the leaders have been suggesting is imminent and full-swinging. Udoma says the reason for the shortcoming, which Nigerians are not wrong about, is due to some factors. Nigerian population growth toggles between 2 and 3 percent. Until the country’s GDP starts to develop at a similar rate, the economic impact will go unnoticed.

There is also the setback of vulnerability and debt. As news flies around that the country owes a fortune of international debt, the notion is quelled by Senator Udoma, who says Nigeria’s debt is not bad at all. “Our debt/GDP is about 19 percent, and the average for Sub-Saharan Africa as a whole is about 57 percent”. The figures are a testament to the fact that the situation in Nigeria is quite moderate, with a sustainable debt. The country as of now is concerting efforts to raise revenues, and the reports from the Federal Inland Revenue Service, FIRS, reveal that tax collection in Nigeria has grown from what it used to be last year to a 30-35 percent. “That’s good enough, and we’d like to do even better than that, having spoken to investors to look upon Nigeria as a lush green enterprise island favourable to do business.

Nigeria’s exchange rate is stable, and her foreign reserves are levelling up, from a low figure of USD 26 Bn in 2016 to a promising USD 44 Bn as of now. By the time efforts are compounded with efforts, the nation’s economy will likely grow and the impact thereof will be felt by many Nigerians. This holds many promises for entrepreneurs, startups, and SMEs in the country’s business sector. With this, Udoma is very hopeful about the results of the ongoing Economic Recovery and Growth Plan (ERGP). Intended to restore growth, invest in people and build a competitive economy, the initiative believes in the development of Nigeria’s human capital. Also, programs such as N-Power, School Feeding, Trader Moni and Conditional Cash transfer amongst many other schemes should be enough for Nigerians to expect nothing but growth.

The facts and opinion formed in this article are credited to Senator Udoma Udoma’s interview with Financial Vanguard.