Sixteen years ago, Malawi was hit by one of the worst droughts that the East African nation has ever seen. Thousands are said to have lost their lives as a result of the situation as many families were surviving on a single meal daily as a result of the famine caused by the drought. And in the aftermath of the ordeal, various parts of the country were plunged into socio-economic chaos.

Like many others in Malawi, the family of young William Kamkwamba also found themselves fighting to get out of the mire that was created in the wake of the drought. William hails from Masitala, and his hometown is known for its trademark red soil which is generally fertile.

The locals in the area are predominantly farmers and William’s father was no exception. But with the unforgiving drought that had hit the village, the livelihood of thousands was now under threat. The red soil in his Masitala hometown had become parched, and it could no longer grow any crop, putting paid to his father’s chances of making any income or even providing food for the family at the very least. Such was the direness of the situation.

But young William didn’t let the severity of the ordeal put him down too; he kept his head up. When virtually everyone else around him was losing sleep over how to get by every day, he had other plans. While the village may have been wallowing in poverty, hardship, and the lack of essential amenities, William set out to make one thing right as his way of contributing to the improvement of the situation in his village. And even though it seemed a long shot at first, it did come good in the end.

William Kamkwamba embarked on a mission to power his village with the only resource that was readily available. There was a food shortage in Masitala, clean and potable drinking water was hard to find, and the bulk of the local population was living under a dollar a day. But despite all the shortages, Masitala still had one thing in abundance: wind. And William decided to harness this source of energy for the benefit of the community.

Many remote villages in Malawi lack access to electricity. William Kamkwamba opted to make a difference by generating electricity from wind. William got off to a start by experimenting with locally-sourced materials in his village to build a windmill — a home-grown solution to a nagging energy need in Malawi. But this was never going to come easy.

William had been kicked out of school because he owed school fee arrears amounting to USD 80. As a result of this, he resorted to self-learning, and his self-tutorials involved regular visits to the local library. An avid reader, William could be seen making frequent trips to the library where he busied himself with books on different subjects. It wasn’t long before he discovered his penchant for electronics.

Before then, he had once set up a small business repairing broken radios for people in his village, but his work with the radios had not earned him much money. On one of his many visits to the village library, he stumbled upon a book titled Using Energy which contained photographs of windmills in it. And that could be thought of as his light bulb moment.

He decided to create a makeshift wind turbine. He experimented with a small model using a cheap dynamo and eventually made a functioning wind turbine that powered some electrical appliances in his home. It was astonishing and unbelievable for the villagers at the time and it didn’t take long before William became the subject of interest for both local and international media outlets.

“I wanted to do something to help and change things,” he said. “Then I said to myself, ‘If they can make electricity out of the wind, I can try, too,” he told CNN in an interview.

“I thought, this thing exists in this book, it means someone else managed to build this machine,” he said.

William Kamkwamba was only 14 years old when he got started on building a windmill and all he had by way of instruction or guidance at the time was the book he happened to have come upon in the library on that fateful day. 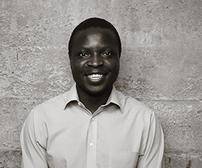 To bring his vision to fruition, William needed materials, and he took to raiding junkyards for such items as bicycle parts, plastic pipes, tractor fans, and car batteries. Blue-gum trees were his choice for the tower.

He continued scavenging for these materials for a while, and it wasn’t long before the jeers came. The young lad was moving from dumpsite to junkyard foraging through ruins in the name of building a windmill, and people thought him crazy. But William remained undeterred as the teases appear to have only reinforced his resolve.

Fast-forward a few years down the line, and the curious boy from Masitala now has five functional windmills standing in different locations within his community, with the tallest of them all at 37 feet. One of his windmills currently powers an area school where he once taught classes on windmill-building.

In his hometown which is located north of the Malawi capital, Lilongwe, William’s windmills generate electricity and pump water for community use. Individuals from within and outside the community are known to also trudge along the dusty footpaths to William’s house to charge their cell phones and rechargeable lanterns. For leisure, people also drop by to gyrate to Malawian reggae music playing on a radio powered by one of the youngster’s windmills. And this feat is made all the more interesting by the fact some of the people who labelled him a nutcase when he first started on the project are now also benefiting from the result of his efforts.

“Crazy” was a word synonymous with the young Malawian when he first started on the project back in 2002 as the very thought of it was ridiculous to the locals. Some even went as far as stating that he may have been bewitched, which is not exactly an uncommon description attributed to individuals who think and act differently in some African cultures.

“All of us, even my mother, thought that he had gone mad,” said his sister, Doris Kamkwamba.

William was the subject of ridicule and scorn from the villagers during that time, but he kept at his dream. He was determined to see the project to completion even as he wasn’t sure it’d be worth it in the end. Utterly oblivious to the fingers and snickers directed at him, he would go about his job. At some point, he was even bolting pieces using a screwdriver fashioned from heated nail attached to corn cob. Such was his ingenuity that he was able to improvise and create stuff from almost anything. Even though he took as much heat from the villagers as he did from the flattened pipes which he used as blades, he remained steadfast in his resolve. 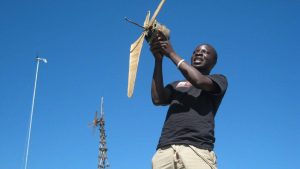 Just a little over three months later, his first windmill was standing, and before long, it whirred to life. It was a euphoric moment for him when he saw a bulb attached to the windmill flicker on — there couldn’t have been a better way to respond to those who thought of his goal as an elephant project at best initially. In the years that followed, he successfully erected four other functional windmills. And before long, the accolades came calling.

Now aged 31, William Kamkwamba is on a donor-sponsored studentship at the prestigious African Leadership Academy; an elite South African institution for young African leaders. Since coming good on his windmill project, William has become something of a poster child and globetrotter. His work even received recognition from former U.S. Vice President, Al Gore, who himself is an ardent believer in “green living.” Now the toast of many congregations, the boy from Malawi now sits amongst entrepreneurs in various parts of the globe sharing the experience of his electricity venture in a small village, north of Malawi’s capital city,

Interestingly, he got his first close-up-and-personal view of an actual windmill on a trip to Palm Springs, California. Lofty and majestic, it was not in the same league as the wobbly, wooden structures that stand like grotesque sentries in his backyard. But this hardly takes away any gloss from the remarkable feat he pulled from what could be thought of as the most disadvantaged of positions. 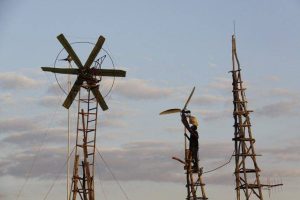 William Kamkwamba’s story was also featured in a 2009 book titled; “The Boy Who Harnessed the Wind”. The book was authored by former Associated Press correspondent, Bryan Mealer, who is believed to have lived in the Malawian village for months in the process of writing the book. A blog about his accomplishments was written on Hacktivate and Kamkwamba participated in the first event celebrating his particular type of ingenuity called Maker Faire Africa, in Ghana in August 2009.

William Kamkwamba’s story was covered by The Daily Times in Blantyre, Malawi’s commercial capital, in November 2006. The story went viral soon after its publication as it caused ripples in the blogosphere. About the same period, TED conference director, Emeka Okafor, extended an invitation Kamkwamba to feature as a guest speaker at TEDGlobal 2007 in Arusha, Tanzania. He obliged and his speech is said to have captivated and enthralled the audience. Moved by his words, several venture capitalists at the conference pledged to help finance his secondary education.

His story was also covered by Sarah Childress for The Wall Street Journal. He became a student at African Bible College Christian Academy in Lilongwe. William then went on to receive a scholarship to the African Leadership Academy and in 2014, he graduated from Dartmouth College in Hanover, New Hampshire.

Amongst his other recognitions and achievements, Kamkwamba was interviewed on The Daily Show in October 2009 where he was comically likened to fictional hero, Angus MacGyver, for his impressive scientific ingenuity. More so, he was the guest speaker at the 2011 Google Science Fair introductory meeting.

The Boy Who Harnessed the Wind was selected as the 2013 “1 Book, 1 Community” title for Loudoun County, Virginia’s Public Library system. 1 Book 1 Community is a countywide reading program that promotes community dialogue and understanding through the shared experience of reading and discussing the same book. Kamkwamba is also the subject of the documentary film; William and the Windmill, which went home with the Grand Jury Prize for Best Documentary Feature at the 2013 South By Southwest Film Festival held in Austin, Texas. In 2013, TIME magazine named Kamkwamba one of the “30 People Under 30 Changing The World.” And the list of recognition he has garnered continues.

These days, he can be seen globetrotting and sharing his experiences in brainstorming sessions with entrepreneurs from various parts of the world. In William Kamkwamba’s story, a new breed of Africans who are taking the initiative and not waiting on their governments or aid groups to come to their rescue is epitomized. These days, it’s about making the most of opportunities and technology in finding solutions to the immediate problems of society, and Africa’s newest generation of entrepreneurs might want to take a cue from this.