The road to success is one devoid of shortcuts; there is no timesaving way to emerge at the front on the entrepreneurial race, and people such as Makafui Awuku are aware of it. This Ghanaian ‘wastepreneur’s’ journey has been one full of wax and wane, twists and turns, and dire straits that yet reinforce that life’s not a bed of roses. In the circles of enterprise, the ones hoisting the victory flags are the entrepreneurs that saw storms and took them by force.

Having lost his father at the age of 12, left with younger sisters and a mother with little or no means of livelihood, Makafui’s background could have almost passed off as an underprivileged outset. Overwhelmed at such a young age, and looking for ways to help cater for his family, his mother’s untimely death capped the tragedy and left the rest of the family in a crestfallen dilemma. What was left of the Waterloo was Makafui’s mother’s USD 1 K life savings, which if unwisely utilised at this point would plunge him and his sisters into catastrophic depths.

Makafui travelled from the rural Ghanaian settlement he once lived to the capital city Accra in search of greener pastures and a good way to utilise the very last of his family’s riches. Not wanting to squander the money, he took up the life of a nomad – sleeping on cybercafé benches and eating the cheapest foods to survive. Makafui had a go at menial jobs to save up for further education. With enough in hand, he applied to a higher institution, but eventually dropped out as the stipends he accumulated were not enough to sustain him in the triangle that is university life – not to mention that he was going to live a rectangular one.

Fair and square did he resolve to face his menial jobs until he had saved up enough to add to his mother’s USD 1 K to start a business. But wary of barking up the wrong tree and getting picked on by wild monkeys, he took out enough time to search for the most operable and yielding business idea that could fetch him money rather than flushing him further down the pipe of privation. Makafui, while awaiting his lightbulb moment, continued to sleep on benches, do odd jobs, work in a church, and even hunted in the bush to sustain himself.

Makafui is not particularly fond of his early years but tells it anyway. He was born in Keta, Sogokope, in the Volta Region of Ghana to a father who was a driver. From as young as he could remember, he always had this pie in the sky of becoming a doctor, probably longing to take after his mother, Mary, who was a nurse. Depending on his wits and instincts, Makafui even went on to start a poultry farm to get that extra money. With his mother’s stroke-harbingered death in 2005, his life did become grimmer. Even while battling asthma, he still tried his luck with a degree in Marketing at the Institute of Professional Service, but, as said, had to call it quits due to insufficient funds.

Africa’s Richest Man Finished 2019 With Another USD 4.3 Bn In His Pocket, Becomes 96th Wealthiest In The World

Finding a part-time work to pay his medical bills for the time he was in school proved abortive. He went as far as working assignments for his course mates, worked as a part-time soccer coach for an international school in Accra, but all to no avail as he still came up short. Makafui eventually had an encounter with one of his mentors and early supporter, the Senior Overseer of the Agape House New Testament Church in East Legon, Reverend Richard C. Whitcomb. The clergyman took pity on him and decided to help alleviate some of his troubles. He gave Makafui a job, helped him pay rent, and took care of his tuition when he decided to complete his final year studies, which he had earlier deferred.

In the interest of addressing the insufficiencies in the Ghanaian education system, and helping young students build leadership skills, he published what was his debut read in 2015 titled The Tertiary Years.

That was followed by his social project called Student Initiative Ghana, which is a platform for young people’s training and development. In an interview with Forbes Africa, Makafui revealed that he has visited more than 15 schools and trained over 8,000 people over a 15-year course in the aspect of brain-training and memory enhancement, helping these young people move forward even with learning difficulties.

Makafui eventually gained admission to the Young African Leaders Initiative (YALI) program which was the contrivance of former American President, Barack Obama, during his tenure at the Oval. The initiative is targeted at the development of the leadership mindset among young Africans and the creation of value in their communities.

Related Read: No Power? No Problem! This Nigerian Engineer Is Making Ironing Possible Without Electricity

The Ghanaian spent five weeks at the Administrative Staff College in Badagry, after which he returned to his home country for an internship program. Working with One Ghana Movement who partnered the Accra Metropolitan Assembly, he took part in a sanitation program which involved a ‘knee-deep-in’ purchase of 1,000 waste bins and their installations across various parts of Accra. And just like that, Makafui finally chanced upon his long-awaited eureka moment.

Trying to keep the city clean and living up to his civil responsibilities as a Ghanaian, the internship made him discover that oodles and slathers of waste were generated during board meetings. As the epiphany of what to do with his mother’s USD 1 K and his seemingly travailing life came closer, he looked through the 17 Sustainable Development Goals and observed the plastic waste problem. Pondering upon the background he already had in waste management – he had taken a course on waste management in the university and had become something of a clean environment enthusiast, and habitué – Makafui took the onus of doing something for communities and cities that are embattled by plastic waste concerns.

In line with an African Development Bank report released in 2002, Ghana generates about 3.6 million tonnes of waste each year, which predominantly comprises food, plastic, and wood. In a bid to join the sparring match against garbage and clean up the streets of Accra, Makafui Awuku founded his clean-tech company, Mckingtorch Creatives, in January 2018 with an innovative mission to turn plastic waste into art. 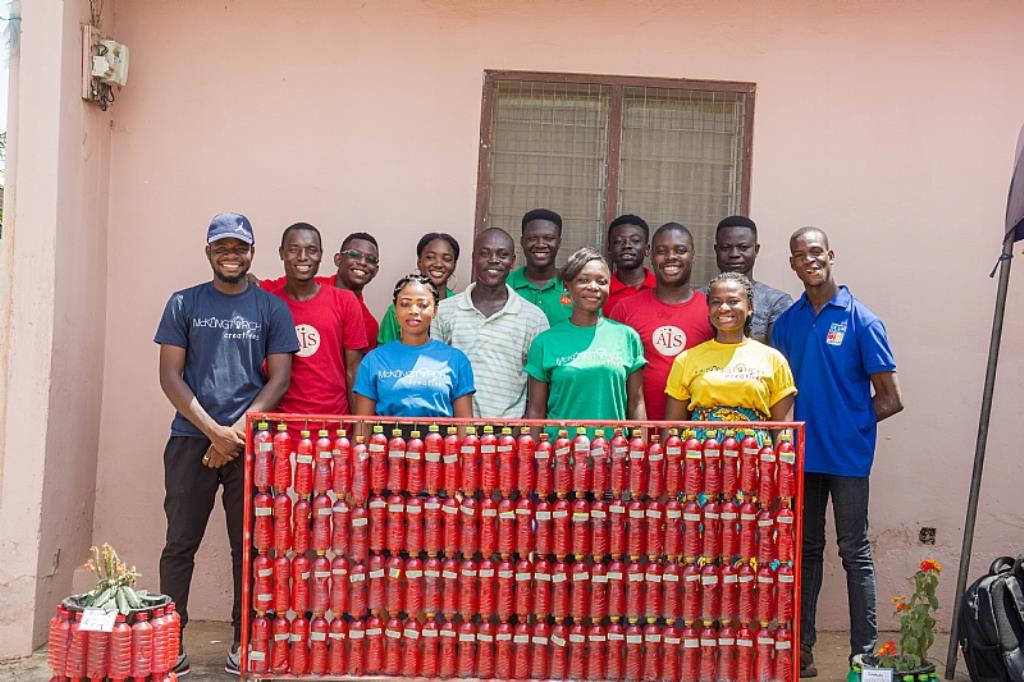 Makafui began marshalling bottles from offices, and for his first project, decided to attempt a Christmas tree, all whipped up from plastic waste. He hired a welder to install a tree-like frame, bought ropes, drilled holes under and atop the bottles, passed the ropes through them and installed them on the tree. By the eve of Xmas, he had completed the 396-plastic-bottle project and installed the Christmas tree in a major street of suburban Accra – Madina.

The statuesque tree changed people’s attitudes – more than 6,000 of them – as they were shocked that such magnificence could be churned from bottles and plastic waste. Witnessing the awe his debut waste project spurred, Makafui surmised to step his work up a notch and model some solutions that could be actualised with the use of plastic waste.

With used plastic, this Ghanaian wastepreneur has created flower pots, bins, wall-hanging, and even sandals to keep the streets of Accra less bedevilled by plastic waste. He also teamed up with one of the biggest manufacturers of bottled water in Ghana to erect a fence with more than 10,000 used bottles to mark this year’s World Environment Day.

Determined to create awareness of workable waste-derived solutions among youths, Makafui hopes that young Africans could be an important part of building a plastic-free planet.

While making cash from trash and building his company, Makafui Awuku opines that for Ghana to adequately eradicate filth, the government must optimally play its supervisory role unendingly.

More: The Malawian Boy Who Brought Electricity To His Village Was Once Called ‘CRAZY’ – Here’s His Soul-Stirring Story