This Whizkid From Sierra Leone Has Made It To Harvard, MIT & Forbes; The Name Is DJ Focus!

It was sometime in 2012 when a 13-year-old boy from Sierra Leone became something of a sensation after he set the global tech scene abuzz with a remarkable invention borne out of ingenious improvisation.

During that period, Kelvin Bokai Doe, aka ‘DJ Focus,’ was the rave of the moment, and deservedly so. The Sierra Leone child prodigy grabbed headlines both locally and internationally when word spread that he had successfully tinkered his way into building working batteries, an FM transmitter, a sound amplifier, a three-channel mixer, and microphone receiver – all these without any form of prior professional training or background in engineering.

Armed with his inventions, it wasn’t long before his own radio station was up and running – a feat he managed at just 15 years of age. And ever since, the sensational Sierra Leonean has become something of a globetrotter; the golden boy and poster child for young innovators in some of the most underdeveloped and economically-disadvantaged parts of the world.

Born October 26, 1999, as the youngest of five children, Kelvin Doe had anything but a rosy childhood. He grew up in a humble suburb on the outskirts of Freetown, the Sierra Leonean capital.

As part of the privations and squalid living conditions that characterize life in poor districts, power was something of an anomaly as the neighbourhood had grown quite accustomed to the slow days and dark nights. The community thought itself lucky whenever it managed a couple of hours of power for a single day each month – yes, it was that bad.

For a child barely in his teens, nobody expected Kelvin Doe to make it something of his personal vendetta to bring an end to some of the problems surrounding his community. But somehow, the young lad managed remarkable accomplishments.

When most kids his age would rather be whiling away time in the playground, struggling with homework, begrudgingly going about house chores, milling about and making a nuisance of themselves on the streets, or awaiting the day’s meal to be served by their mothers, the young boy from Sierra Leone got busy. From as early as 10 years of age, Kelvin made the scrapyard his turf and something of a second home – sometimes, to the anger of his folks. A tinkerer and fiddler by nature, Kelvin was quite the ‘curious cat,’ except that he didn’t get killed.

After school lessons, Kelvin could be seen marauding the community and finding his way to scrapyards and dumpsites. He was not a scavenger or destitute, he was just a child on a mission. And if bringing that mission to fruition meant digging through piles of garbage, Kelvin had no qualms rolling up his sleeves and getting dirty.

At some point, his home was beginning to look a lot like a miniature electronic junkyard as he brought home and stacked pile after pile of electronic parts that most people would call worthless in the living room of his home. Many times, his mother would go into a nagging fit upon returning from work to find the house even messier than the previous day. But young Kelvin will let nothing hold him back. For a child his age, he showed a remarkable determination by remaining undeterred.

You’ll also like: Meet Silas Adekunle: The Nigerian Prodigy Who Is Fast-Becoming The King Of Robotics

And all that effort was to pay off eventually when Kelvin Doe’s passion for tinkering with parts and assembling gizmos saw him build his own battery to power lights in his home and neighbourhood, a multi-channel audio mixer, a hand-powered generator, and an FM Radio transmitter. He built all these devices from discarded metal, cargo boxes and cables he collected from his many trips to dumpsites. Soon, the self-taught engineer was fixing broken electronic devices belonging to friends and other people in his community. But all these achievements were to be dwarfed by his next move which proved the ultimate masterstroke. Kelvin had already exceeded expectations by miles when he taught himself to build those devices but he was going to go one better. With the radio transmitter he had built, Kelvin’s next move was to set up his own local radio station through which he became something of a local OAP, broadcasting news and airing popular songs to the listening pleasure of the locals under the moniker, DJ Focus.

The radio station was powered by a generator created from a deteriorating voltage stabilizer which he recovered from the trash, while a simple antenna let his neighbourhood tune in and listen.

Having assumed local hero and cult status in his immediate community, his stock was to rise even further when he was featured in a programme on a local TV station. And that was to mark the beginning of his journey to international fame and fortune.

By sheer providence, his local TV appearance caught the attention of David Moinina Sengeh; a Ph.D. student of the MIT Media Lab at the time, who had put together a local youth-oriented innovation challenge.

DJ Focus participated in the challenge and his entry, which was a generator he had built from soda, acid, and metal wrapped together with tape, proved ingenious and inspirational as he had initially built it to deal with the power problems troubling his radio station. Fast-becoming the toast of everyone, it wasn’t long before he was catapulted to heights he himself would hardly have ever imagined.

With support from Sengeh, William left familiar surroundings in Sierra Leone for a life-changing experience in the United States. He participated in the MIT Visiting Practitioner’s Program, where he made history by becoming the youngest person to ever take part in the program. As the youngest-ever “Visiting Practitioner” for the MIT International Development Initiative, students in two D-Lab classes were greeted to presentations of his inventions by Kelvin himself.

More so, the little boy from Sierra Leone made connections and had discussions with community members at MIT, while also weighing in with hands-on research at the MIT Media Lab. From scrapyards in a Sierra Leonean suburb, the prodigy had gone on to even deliver lectures at some undergraduate engineering classes at Harvard – such was his meteoric rise.

His accomplishments and experience were covered in a documentary and upon release, it garnered widespread acclaim. Millions are said to have been awed and inspired by his remarkable journey, including Barack Obama, who was President of the United States at the time.

Kelvin was sponsored on a trip to the United States after his inventions were featured at the 2012 Innovate Salone Competition organized by Global Minimum. This competition was symbolic in that it was the debut of the school innovation challenge in Sierra Leone and with some support from members of his team, Kelvin emerged the winner of the competition.

His success in the competition saw him land a chance to travel to the United States where he was featured as a speaker at the “Meet the Young Makers” panel for the 2012 World Maker Faire which took place in New York. 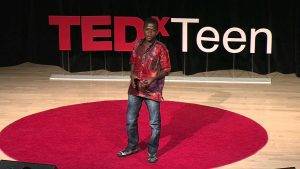 Kelvin famously appeared at the 2012 edition of TEDxTeen where he spoke to Harvard students. During his talk, he referred to creativity as a universal element that can be unearthed in the least expected places. During his session, Kelvin also tipped passion and perseverance as essential ingredients for nurturing creative ability. And all these nuggets of wisdom coming from a youngster can be attributed to the experiences he has garnered from what has been a relatively short but eventful journey.

In May 2013, Kelvin put pen to paper on a solar project pact with Canadian High-Speed Service Provider, Sierra WiFi, in a deal believed to be worth as much as USD 100 K. The young inventor is known to regularly churn out new inventions via social media. Some of his latest inventions include an emergency shoe charger and a mobile phone tracker.

Kelvin Doe turned twenty in 2016 and that same year, he launched a startup called KDoe-Tech Inc, as well as The Kelvin Doe Foundation. Fast-forward two years on and the Sierra Leonean whizkid is known to still have an insatiable appetite for tinkering with electronic gadgets. Kelvin is also something of a ‘keypad fiddler’ as he is known to also actively roll out tweets on a regular via his Twitter page.

Kelvin currently lives and works in Ontario, Canada, where he and the rest of the team at KDoe-Tech are believed to be working on a new product called KDoe Light; a solar light and phone charger rated at a 165-lumen output and 30-hour runtime at 25 lumens.

When he’s not working, Kelvin could be found speaking at seminars, meeting world leaders, and generally serving as an inspiration to the younger generation of entrepreneurs and engineers while also motivating them to chase their dreams.

His journey has also shaped into something of a quest for a better world as he now leverages his burgeoning profile in bringing to light some of the world’s most pressing political problems. Kelvin also has a particular interest in improving education in Africa. In what has been a relatively short but storied career, Kelvin Doe has put himself on the world map as one of the most respected young inventors of his time. He’s known to have sat with a number of world leaders and elite personalities; most notably, Canadian Prime Minister, Justin Trudeau, Ghanaian President, Nana Akufo-Addo, and former US Secretary Of State, Hillary Clinton. Through many different platforms, his story and words have also reached many young people within and outside the African continent.

As part of his achievements, Kelvin was appointed as an Honorary Board Member of Emergency USA back in 2016. Emergency USA is a charitable organization that has set out to serve up medical care to victims of war and poverty around the world for free. That same year, he successfully held his Innovation Catalyst Tour in Ghana – a two-week long tour during which he spoke at ten universities and paid visits to some of Ghana’s top tech startups.

The Innovation Catalyst Tour is an initiative of The Kelvin Doe Foundation which targets six African countries including Ghana, Nigeria, Rwanda, Kenya, South Africa, and Sierra Leone. The Ghana Tour was the result of concerted efforts between the Foundation, Idea Factory Africa, and Young CEOs Africa.

Kelvin was also named in Forbes’ 30 under 30 list of 2016 as one of Africa’s most promising entrepreneurs. At such a young age, his contributions to the advancement of technology and innovation in Sierra Leone and the rest of Africa have been nothing short of immense. Through the mentorship of youngsters in the field of engineering and technology, Kelvin is doing a solid to the grooming of Africa’s next generation of innovators and thinkers.

What the future holds for the boy Kelvin Doe is pretty much anyone’s guess at this point, but if the precedent is anything to go by, it does seem very likely that we haven’t heard or seen the last of the boy from Sierra Leone.