From Cote d’Ivoire comes the story of a trained lawyer and former computer retailer turned tech entrepreneur. The 37-year-old Ivorian is helping young children in parts of the west African country study better with what I would like to call a ‘solar-in-a-bag’ innovation.

His invention, Solarpak, is a school bag with a solar panel and a lamp which helps to better the educational prospects of children living in parts of Cote d’Ivoire that are cut-off from the power grid. In these non-electrified areas, children are now enabled to study after dark in comfort with the use of these solar-powered lamps which comes in a backpack.

Evariste’s creation was motivated by the need to better ‘the lot’ of children living in poor communities where education is often shoved into the backseat because of the lack of infrastructure and the poor standards of living. Before the tech entrepreneur found the motivation to pursue what now looks a lot like a noble course, he was something of a perennial journeyman whose business commitments had him covering the length and breadth of the ‘Coast of Ivory.’

On many of these journeys to some of the country’s remotest parts, he was awakened to the reality that power supply was kind of an alien concept in those economically-disadvantaged communities.

Nigerian Rocks Crypto World By Returning NGN 28.8 Mn Worth Of Bitcoin That Was Sent To Him In Error

10 Branding Must-Haves For Your Startup

Even though the purpose of those journeys was mostly business, somehow Evariste still found time to worry about the people living in those areas, with the fate of the school children being of most concern to him.

On one of his business trips, he did come across children who were trying to study in the dark with the only source of illumination being the flickering flame of an oil lamp. The then businessman thought to himself how difficult it must be for this children to have a proper education.

In many of those rural communities, the children have to walk several kilometres to get to the nearest school. And they have to cover the same long distance on their return home. More so, being that some of these children have to assist their parents or work as farm-hands for the better parts of the day, they resort to attending afternoon/evening school.

This implies that they return home mostly after dark, trudging along in the precarious darkness of the night, and arriving their dimly-lit homes. Hence, they are unable to work on their assignments, let alone undertake any form of after-school studies.

Evariste was deeply troubled by the situation and that concern saw him begin to explore ways to at least, improve the lives of the children. Clearly, they were not afforded a level playing field with those studying in the more developed areas and his stomach may have tied itself into a knot whenever he thought of what might become of them if they continued to wallow in lack.

There was Evariste having sleepless nights over the issue when, ironically and quite literally too, the solution peered right through his window blinds with the break of every dawn.

It took a while but it eventually dawned on him that solving the immediate electricity conundrum in those locales meant harnessing the most available resource, and he didn’t need a Shaman to point him in the right direction.

“In Africa, we have plenty of sunlight, so why not think of a way to use that source to help these children so that they can do better in school?” he remarks.

Evariste wanted to provide illumination to those schoolchildren at all times – his vision was to enable them to have access to light whenever the need arose. Thus, the creation of Solarpak. His creation is essentially a small, lightweight backpack that has a solar panel strapped on and a detachable lamp that produces light when connected to the battery via a regular USB cable. 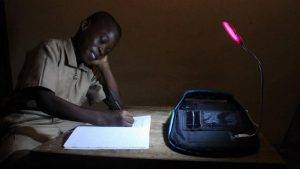 Because of the unique placement of the solar panel on the rear of the backpack, getting the battery charged is more or less an effortless venture as a casual stroll at any point during the day is all it takes to accumulate charge.

And the fact that the battery only needs half an hour to charge fully while being able to supply LED reading light for up to five uninterrupted hours makes it quite the simple solution to what looks like a complicated problem. Selling at around USD 23.00 each, the bags do come at a bargain too.

Evariste’s Solarpak allows children to complete take-home assignments and study after school even after dark – something that hasn’t been the case for many rural communities in Cote d’Ivoire for quite some time.

The invention is, thus, bringing about improvements in the academic performance of the children and giving them a better chance at breaking from the vicious cycle of poor literacy and less-than-average living standards that have been the case for several generations prior.

Since it transmogrified from the confines of Evariste’s mind to the three dimensions of reality, Solarpak has gained widespread acceptance in parts of both Cote d’Ivoire and neighbouring African countries.

Although he had to dig into his savings and the profits from his IT business to raise the staggering USD 76 K required for the procurement of the first batch of 500 bags in 2016, he displayed astonishing philanthropy by giving out 200 of those for free. He seeks partnerships with institutions that promote primary school education – this helps him reach as many children as possible. Evariste is also known to be something of a tireless advocate for his brand, meeting with government departments, NGOs, and various United Nation agencies. Partnerships with these institutions have seen his invention gain significant adoption and widespread reach.

Thousands of the product have been donated for charity, and no less than 55,000 are said to have been sold. Plans to export the school bags to countries like Gabon, Burkina Faso, Madagascar, as well as NGOs based in Germany and France, also appear to be gaining momentum.

Just last year, Evariste Akoumian was invited to Haiti by the country’s Ministry of National Education and Vocational Training to present his invention.

In a move that was supported by the UNESCO office in Port-au-Prince, the Haitian capital, one thousand school bags were donated to the Caribbean country.

For all the talk bordering on functionality, it is also quite interesting to note that the bags also have some sort of aesthetic and ergonomic appeal. It is no secret that many children living in poor communities carry their books and other materials in plastic bags or even rice sacks since they can’t afford proper backpacks.

In that regard, the Solarpak sort of takes out to birds with a single slingshot by providing both a backpack and a source of light. The fact that the bags are relatively lightweight, while also coming in cool designs and colours, can be thought of like icing on the cake.

His efforts have seen him gobble up accolades in the form of awards and honourable mentions. Amongst others, he was the recipient of the Award of Merit at the Africa Expansion Forum which took place in Montreal, Canada, last year, as well as the 2018 African Prestigious Awards. Evariste also made it to the finals of the African Talent Awards which took place last year.

Evariste Akoumian appears to have found a passion for bettering the lives of children living in communities that lack infrastructure. Part of his broader plan is to set up an assembly plant in Abidjan which will boost production, provide jobs, and empower people. He also hopes to reach as many as 10 million children across the globe someday.