It was around this time last year when five teenage girls from Kisumu, Kenya, took everyone by surprise by beating the massive odds that were stacked against them and becoming Africa’s sole representative at the finals of the Technovation Challenge which took place in California last year; being the only African team whose app was accepted into the challenge sponsored by Google, Verizon, and the United Nations.

The girls; Stacy Owino, Cynthia Otieno, Purity Achieng, Mascrine Atieno, and Ivy Akinyi – who were all aged between 15 to 17 years at the time – broke from the norm and took the world by storm when they set out to address a particularly pressing concern; one that has bedeviled parts of Africa since time immemorial but remains somewhat neglected. One that is not uncommon but is rarely ever thought of or spoken about.

Their creation, i-Cut, is an app that is aimed at tackling and combating the ugly, abusive, and somewhat dehumanizing practice that is Female Genital Mutilation (FGM). Through their app, the young schoolgirls created a medium through which help can be sought, reports made, and information gotten on all things bordering on FGM. The platform also allows for donations and suggestions from users, while offering a feedback feature.

How To Overcome Some Of The Major Business Obstacles

The prototype of i-Cut, which was the brainchild of these young Kenyan teens, earned them a deserved place at last year’s Technovation World Pitch Summit; an initiative that is committed to helping unearth and develop some of the best girl entrepreneurs from around the world who have designed apps that solve problems related to the Sustainable Development Goals (SDGs) in their immediate communities.

Their participation in the competition culminated in an appearance at the finals, where they competed alongside 11 other teams from secondary schools around the world for the chance to turn their mobile app solution into a fully-launched business with support, as well as USD 15 K in funding for further development of the app to enable real use in their community at the climax of the competition which took place in Silicon Valley in August 2017.

The teen girls who entered into the competition with the moniker; “The Restorers”, are looking to offer respite to the significant number of girls in their community who have been traumatized by FGM, with current statistics obtained from a UNICEF report hinting at one in every four Kenyan women having suffered some form of FGM.

Although legislation has been put in place to alienate the practice which usually entails the total or partial removal of a female’s external genitalia in Kenya since 2011, it still poses a problem in some parts of the East African nation. In spite of education, dialogue, and enlightenment efforts, it still affects 28% of girls in the country, and the rates of FGM vary among communities. According to UNICEF, 200 million females across 30 countries have undergone FGM globally.

It still represents a human rights violation that is yet to be eradicated as many females still suffer the gruesome and dehumanizing ordeal on account of some purported cultural significance in areas where it is thought to serve as a rite of passage and prerequisite for marriage. The non-medical procedure is known to put both the physical and psychological health of females in jeopardy; a reason for its declaration as illegal in Kenya and other countries.

The proposition from these bright high school teen girls is an app through which females who are being compelled to undergo the illegal procedure can contact the relevant authorities via a distress call and raise the alarm as per their situation. The i-Cut platform also has provisions which allows for survivors who have been forced through the ordeal to alert local authorities on violations and the perpetrators, as well as the option to locate rescue centers closest to them where they can seek refuge, take solace, and get succor and help in the event of a trauma. And it gets even better as the i-Cut app can help with all these and more at the tap of a button!

With the app’s interface incorporating a five-pronged feature which include; “help,” “rescue,” “report,” “information on FGM,” and “donate and feedback,” the creation of the teenage girls seems well-equipped and quite adept at curbing the menace of FGM in parts of Kenya.

In a conversation with the Thomson Reuters Foundation (TRF), Owino, one of the app’s software developers can be construed as implying that The Restorers are committed to curbing the spate of FGM which is a big problem affecting girls worldwide. According to Otieno, another member of the team, their mission is to “restore hope to hopeless girls.”

It is envisaged that the app could indeed prove a veritable tool in the fight against FGM; a procedure that leaves girls susceptible to a myriad of physical health problems and at the mercy of various psychological ills. Some of which are found to include an increased tendency to drop out of school, a severely-battered career and employment prospect, and even fatalities in extreme cases – no thanks to the unhealthy association that exists between FGM, early marriage, and pregnancy.

While the i-Cut app may indeed be the first step towards completely eradicating the illegal practice and allowing girls decide their destinies, caution, however, must be applied as FGM is still regarded in some circles as something of a deep-rooted, social ritual handed down from generation to generation. With a view to preventing rifts, blowbacks and outbreaks of wanton violence on young females who leverage the platform in less-enlightened societies, it might do a lot of good to familiarize communities with the development by means of educational empowerment and enlightenment programs. This can help in eschewing the brewing of needless feuds and even bigger problems.

The five teenage girls all belong to the Luo tribe of Kenya; one that is mostly considered to have denounced the practice of FGM, and even though none of the girls have actually been a victim of the practice, it takes nothing away from the fact that they have experienced firsthand some of the devastating effects that stem from FGM. A valid case in point exists in the form of a former classmate of theirs never returning to school after she went under the blade; a classmate who according to Achieng, one of the brains behind the i-Cut app, was one of the smartest and brightest girls she knew at the time, as they were close friends.

The Restorers may not have gone all the way to clinch the grand prize at last year’s Technovation World Pitch Summit, but they sure won over many hearts in their bid to proffer a lasting solution to a social ill. They may not have gotten the laurels, but they certainly deserved all the accolades and global acclaim that accompanied the buzz their app created. If anything, they represent a prime example of Africa’s younger generation and the newer breed of entrepreneurs; a new crop of talent that is looking inwardly for solutions to some of the continent’s most pressing problems. 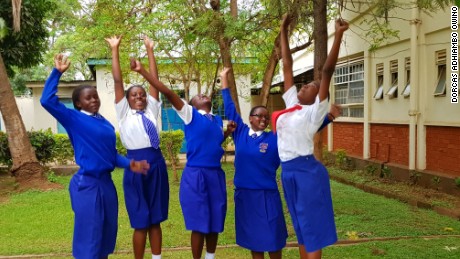 “This whole experience will change our lives,” Owino told TRF. “Whether we win or not, our perspective of the world and the possibilities it holds will change all our lives for the better.” Akinyi added, “We just have to use the opportunity as a stepping stone to the next level.” Such drive and positivity coming from African high school teens? Incredibly impressive and utterly remarkable!

These Kenyan teenage schoolgirls went all the way to the global stage, held their own at the grandest of occasions in the company of the very best, kept it together at the cusp of glory, and emerged unscathed and unfazed from the threshold of success as potential world-beaters. They explored unfamiliar territories, redefined dimensions, strutted beyond boundaries with aplomb, and gave “catching them young” a whole new meaning. As we mark a year on their incredible journey, their story should serve as an inspiration to other young and prodigious African tech talents that it is never too early to live your dreams and save your society. There may, indeed, never be a better time to hop on the bandwagon than now.