Last year, the Kenya Commercial Bank (KCB) was rocked by a major heist which resulted in the carting away of sums amounting to millions. While virtually everyone else was left shocked and reeling by the magnitude of the theft, it got one man wondering if such an incident could be prevented.

And that was to spell the beginning of a journey for Alfred Waweru. In trying to explore ways through which such an incident could be avoided in its tracks, the 32-year-old opted for a technology solution. He spent the next couple of months designing prototypes and trying them out. What he was looking to create was a security gadget that could detect intruders in a room and raise the alarm. After several iterations, he stumbled upon something of the Holy Grail when he assembled an automatic caller that is capable of sensing movements from up to seven meters away. 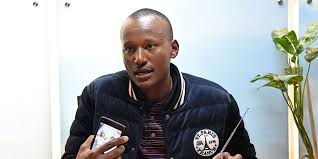 Alfred’s creation is a gadget which is fitted with a sensor that can detect movement and send signals to a phone attached to it, which in turn, automatically calls or alerts the owner to take necessary action. And the invention is made all the more interesting basis the fact that this stroke of genius is coming from an individual who was forced to quit school after he completed his primary education due to lack of funds.

The device can be considered to be attuned to the security needs of homes, offices, security agencies, firms, workplaces, and banks. Also incorporated into the design of the device is a tweak feature which makes it possible to adjust the settings and make it sensitive to objects of certain weights. And this could come in handy in detecting suspicious movements in areas of restricted access.

The gadget comes with an on/off button, as well as a timer which when set allows for the alarm to go off or come on only at specific times – and this makes for even more convenient operation. The rechargeable device also comes with a one year warranty and Alfred has set the price range between USD 99 and USD 198 apiece, depending on the various power backup capabilities.

Come 2020, All Africans Might Be Able To Travel To Nigeria Without Visa

The father of four who has a history of tinkering with electronics and exploring various business ventures, claims that the device has received glowing reviews from a number of customers that have sampled the product since its official release. He also intends to improve the product even further going forward.

When Alfred first came upon the idea of designing an automatic caller to forestall incidences of theft and unauthorised entry, he went all in with his savings which amounted to around USD 245 at the time to bring his Eureka moment to life. Such was his belief in the idea that he gave it his all by committing the entire of his savings to the purchase of cables, phone, and plastic boxes from far-away China.

While his first attempt at assembling the product may have turned out a fiasco, he remained undeterred and firm in his resolve to see his efforts yield fruit. And all that resilience soon paid off when he successfully rolled out the first working prototype for the product.

The sheer audacity of the Thika bank robbery left many Kenyans dazed as it was reported that around USD 515 K was carted away by the daredevil robbers in the heist. Like something off a Hollywood movie, the perpetrators of the crime are said to have gained access to the bank’s vault strong room through an underground tunnel and stole cash stashed in two safes. A bookshop opposite the building that houses the KCB branch is believed to be the point where the digging of the tunnel began. The partners had apparently managed the bookshop in crime as a front for their true schemes.

In July this year, police launched investigations into another incident where around USD 198 K was stolen from Family Bank in Ruiru. Investigations revealed that the thieves had broken into the bank under cover of darkness at an unknown time by cutting through the rooftop. By utilising such devices as the automatic caller which is the product of Alfred’s ingenuity, such moves could be thwarted to a considerable extent.

And how often are we afforded the option of defeating such a large scale loss with a device that costs only two-thousandths of it? Emerging tech entrepreneurs like Alfred Waweru are genuine examples of Africans who are taking the initiative by using technology to solve some of the problems bedevilling their immediate communities. With the right amount of support in the form of recognition and patronage, much more could be achieved.