Learnt Entrepreneurship As A Child At Father’s Restaurant, Now He Is Changing The Face Of Construction In Mozambique

Faustino Quissimo spent most of his early childhood at his maternal grandparents’. He was born to working parents who lived in Maputo, the Mozambican capital, but a few weeks after his birth, he had to be taken to his grandparents since both his parents had to tend to their jobs.

Hence, he was mostly raised by his grandparents. The lad had, in fact, grown quite used to living with his grannies, who themselves had taken quite a liking to their grandson, and those first few years together did see Faustino grow into a zestful and bubbly young boy who loved to shoot hoops and win trophies.

It was as blissful a childhood as any child could wish for in Maputo but he was always going to step outside the bubble at some point – and maybe for good reasons too. Growing up, the kid had proven himself quite adept and skillful at many things but he was to discover even more about himself when his father offered to have him join the family business right about when he turned twelve.

Faustino’s father ran a restaurant in Inhambane, and as he was always willing to take on new challenges, the young boy jumped at the chance to contribute to the family business. This was his first real, close-up encounter with business and the lad was eager to make the most of it.

Faustino seized the opportunity to get to grips with running an actual venture. He would rush down to the restaurant every day after school in his uniform and work behind the counter. The restaurant didn’t close until late evenings and that meant turning in late every night. Balancing his school work with the demands of his newfound flair also proved quite a challenge.

Nigerians Are Now Paying More For Calls & Data Due To A 7.5% VAT Hike & No One Is Liking It But he stuck it out. Within a few months of joining his father’s restaurant business, Faustino had gotten the hang of everything. By the time he turned 14, he was basically running it. He had proved his competence beyond doubt, so much so that his father could be absent for days and be confident that he’d be able to handle the reins. And he didn’t disappoint.

Despite how well he was handling the business, Faustino was under no illusions that he was sailing his own ship. He still saw himself as a deckhand who happened to just have the run of the vessel whenever the captain had to attend to something else.

Faustino didn’t get too comfortable. He knew his father cherished his input in the business but the young boy longed for something of his own. He had paid his dues, learned the ropes, and was now looking to explore his own path.

At that point, he began to consider many business and how he’d go about getting them off the ground. It was during this time that he dove head first into many ventures, only to be boomeranged back to the starting point.

The failures recorded in his initial attempts at business taught him some valuable lessons. He was low on capital so he needed to really take the time to study the market and figure out his next move. The idea was to find a business that wouldn’t require a huge capital outlay to setup but yield returns on investment within a short period.

And he soon found what he had been looking for. With buildings popping up everywhere in Maputo, Faustino saw an opportunity to make an entry into the construction business. He decided to put his money into the purchase and supply of materials and services that are complementary to the construction of properties.

That was in 2011 and having pitched the idea to a friend of his who shared similar thoughts, the duo went about trying to find the funds for their business which was going to involve selling and assembling processed wood specifically for hard floors, as well as selling and installing some of the materials required for the construction of swimming pools.

Between selling T-shirts and organizing music concerts, Faustino had raised enough starting capital and in 2015, the company; TQ Group Services, was born. The business is involved in the production of hardwood floors and construction/maintenance of pools using locally-sourced raw materials.

When the company first began operations in 2015, there were only 13 employees on its payroll but that number has since doubled. With some effective marketing, Faustino has masterminded what seems a like a coup in the Mozambican construction industry by serving up flawless wood flooring and affordable swimming pools in one fell swoop. 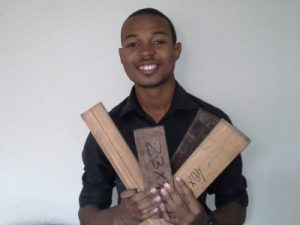 The business went through a bit of a stop-start, trial-and-error phase initially, but this helped it fine-tune its model. Faustino also got some slice of good fortune in that construction in Mozambique hit something of a purple patch right about when he set up his outfit. People were on the lookout for quality building materials and there was TQ Group Services dishing the goods.

Although he holds strong convictions in the quality of work his company delivers and even cites it as one of the business’ strongest points, Faustino sees a bigger challenge in scaling up and taking on the big companies.

However, the Mozambican entrepreneur remains undeterred by the competition and instead, counts his small victories. The company has been able to raise money for the procurement a very expensive flattening machine, which is also eco-friendly and easy-to-use. TQ Group Services also managed to secure a contract from Inhambane City to erect a guest house in one of the region’s hottest spots for tourists.

He also takes pride in the knowledge that all the company’s employees are well catered for and their working environments are free of safety hazards.

Faustino Quissico was named at Anzisha Fellow in 2016, aged only 22. Going forward, he has set his sights on expanding and diversifying the company, which will see it gross more assets and provide employment opportunities for a larger number of people.