Twenty-five-year-old Sandile Shezi got heads turned and eyebrows raised when he became South Africa’s youngest self-made millionaire at 23. In a move that the hackneyed hardliners would probably be inclined to describe as reckless, the youngster undoubtedly exhibited courage that is not usually the stuff of persons his age. And it’d be a rather harsh call not to have the end justify the means on this one.

Shezi took the ultimate gamble when he went all in on a forex trade with money that was supposed to pay for his third-year tuition in college.

Granted; the whole exercise could have, just as well, turned out a fiasco. Shezi could have fallen out with his folks and probably be trying to get back on their right side for the rest of his life and theirs, but I guess we’ll never know – just like we’ll never know what would have been his story at this point if he didn’t take that ‘reckless’ dive. Be that as it may, he does deserve some credit. I mean, you’ve got to hand it to the kid. His efforts are in keeping with long-standing natural laws which hold that; “If you never dare, you will never do. And if you never do, you will never know.” It is on that note that I say; ‘All Rise for Sandile Shezi; Taker of Risks and Rainer of Bills.’ (Okay. I’m done goofing around. Back to the story).

Shezi became an instant hit both at home and abroad after his ‘forex heroics.’ His meteoric rise saw him become a globetrotter, motivational speaker, and the poster boy for the world’s youngest self-made millionaires. But what many might not know is that the deft move which saw him score those life-changing numbers, and quite literally too, was more or less influenced by privations and hardship.

No Job Offers Despite First Class, Two Botched Businesses – This ‘Superhero’ Has Now Helped People Save USD 15 Mn In 2 Years

Flutterwave Is Stuck In A Chaotic Loop Of Nightmarish Scandals [UPDATED]

Go a few years back in time and Shezi was just another young boy trying to survive and looking to find his feet in a humble South African neighbourhood. He came from less than modest backgrounds, but it would appear the lack that characterized most of his childhood became the motivator that saw him work up a thirst for a much better life.

Also Read: Now There’s A Backpack That Turns Into A Night Lamp – Thanks To This Ivorian Entrepreneur

Even from his high school days, he showed glimpses of his desire to break free from poverty by selling muffins for extra pocket money. At that time, though, he was the subject of ridicule from his peers as many jeered at him for taking up such a ‘less-than-glamorous’ venture.

Young Shezi had his heart set for business, though, and he would not let himself be deterred. He cranked things up when he started moving from household to household selling clothes.

This particular venture gave him a clearer picture of what running a business indeed implied, and it could be said that he saw more rejection than he did appreciation while engaged in the house-to-house clothing sales venture.

Learning about forex trading from random information resources did sound the right notes with the young entrepreneur, and this was to herald a turning point in his life. The concept of trading forex piqued his interest, and soon he was beginning to see small funds trickle in, however intermittently.

Shezi was clawing his way up the rungs of the university ladder when he first caught wind of forex trading. Being an undergraduate, he didn’t have much by way of substantial funds for investment, or did he? Well, it depends on how you look at it.

His parents were painstakingly seeing him through school on the backs of their meagre income – there was barely anything left for upkeep after tuition and course materials had been taken care of. For a child in his circumstance, what he was to do next felt a lot like being clad in a straitjacket and still choosing to leap onto quicksand.

Related Read: Having Built A USD 10 Mn Company, This Nigerian Entrepreneur Might Just ‘Do A ToysRus’ In His Homeland Long story short; Shezi took a big gamble by investing money that was supposed to offset some of his academic bills on a trade whose success was not exactly set in stone. And it gets even more interesting.

Having put all the money for his education into forex trading, he took a break from school to focus entirely on his new venture – this happened in his third year at the university, and his parents had no idea. Now, there are like a thousand different ways the broth could have gone sour for him, but somehow, the risk ultimately paid off.

The South African entrepreneur did a number on the odds when his audacity and bold risk-taking turned him into a millionaire overnight at 23. When word got out that he’d quit school, his parents were predictably incensed but the knowledge that he had amassed a fortune worth up to USD 2.3 Mn during that time away from school was always going to be enough to douse any flame.

Even though he had gone about it the hard way by suspending his education, he now advises people against towing a similar line as the market can be very volatile. 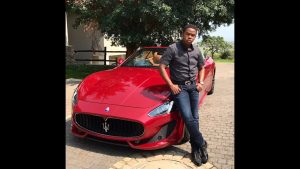 Despite his remarkable achievements, Shezi returned to school and subsequently obtained a National Diploma in Public Relations, Advertising, and Applied Communications from Durban University of Technology (DUT). He also completed a global leadership program at Harvard.

The youngster who has a reputation for being a ruthless, high-risk forex trader, and who also has an uncanny resemblance to a ‘baby-faced assassin,’ now spends time coaching people on how to trade foreign exchange safely and profitably, while also mentoring and motivating young people from disadvantaged backgrounds to break free from poverty by embracing technology and taking ‘calculated risks.’

In 2014, his company won the African Forex Expo Award for being the best training and education provider. Through his firm, Sandile claims to have offered forex training to over 2000 people for free. The kid is also known to love his gadgets and cars with some drones and supercars forming part of his luxurious collection.

Don’t Miss: Meet Jean Bosco Nzeyimana: The Rwandan Entrepreneur Who Is Changing Lives One Briquette At A Time